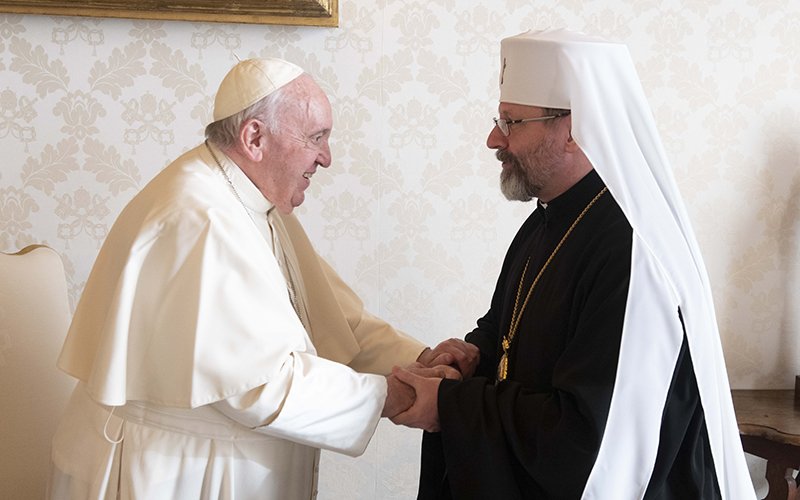 VATICAN CITY (CNS) — Pope Francis has continued to call on Russian and Ukrainian leaders to negotiate an end to the war, but the head of the Ukrainian Catholic Church told him Russia wants only the destruction of Ukraine.

Ukrainian Archbishop Sviatoslav Shevchuk of Kyiv-Halych met Pope Francis Nov. 7 at the Vatican, the first time the two have met in person since Russia started the war in late February, although they have spoken on the phone many times.

Archbishop Shevchuk gave the pope “a fragment of a Russian mine that destroyed the facade of the Ukrainian Catholic church building in the town of Irpin, near Kyiv, in March,” the archbishop’s office said. “It is a very symbolic gift, not only because Irpin was one of the first ‘martyr towns’ affected by the Russian aggression against Ukraine, but also because similar pieces of landmines are extracted from the bodies of Ukrainian soldiers, civilians and children, a visible sign of the destruction and death that war brings every day.”

Returning to the Vatican from Bahrain Nov. 6, Pope Francis had told reporters traveling with him that the Vatican is “constantly attentive” to what is happening in Ukraine and that the Secretariat of State continues to do what is possible and has worked behind the scenes to help arrange prisoner exchanges.

The pope also told reporters he thinks the cruelty of the attacks on Ukraine and its civilians is the work of mercenaries, not Russians, who are “a great people” and have a strong “humanism.”

Meeting Archbishop Shevchuk the next day, Pope Francis reiterated the Holy See’s commitment to end the fighting and find a way to obtain “a just peace,” the archbishop’s office said.

“The war in Ukraine is a colonial war, and the peace proposals coming from Russia are colonial appeasement proposals,” the archbishop told the pope, according to his office. “These proposals involve the denial of the existence of the Ukrainian people, their history, culture and even the church. It is the denial of the very right to the existence of the Ukrainian state, recognized by the international community with its sovereignty and territorial integrity.”

Still, the archbishop thanked the pope for all his prayers and efforts “to stop the war and mediate peace, free hostages and prisoners and organize the universal solidarity of the Catholic Church on behalf of the suffering Ukrainian people,” the statement said.