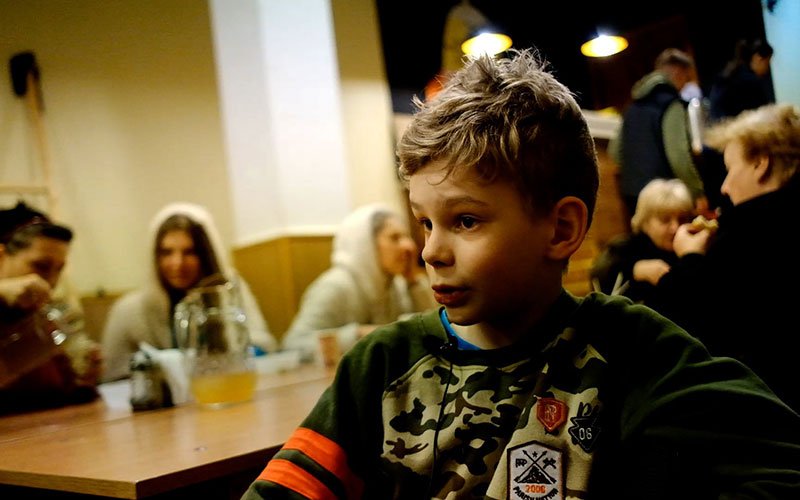 Tymofei Skorobagach, a youngster from Kyiv, is pictured at the Lviv Central Baptist Church in Lviv, Ukraine, March 8, 2022. He noted that "there are also child volunteers" at the center. Ukrainians forced to flee cities being bombed or besieged by Russia have found safety and help in Lviv. (CNS photo/Voznyak Production)

LVIV, Ukraine (CNS) — The massive movement of women and children fleeing Russian bombardments in Eastern Ukraine has led hundreds of thousands of them to Lviv, less than 50 miles from the Polish border.

In churches of every denomination, schools, orphanages, seminaries and the Ukrainian Catholic University, they find welcome, shelter and a warm meal.

Some stay only briefly as they prepare to wait hours in line to cross the border. Others hope that despite the air raid sirens and Russian bombing of military targets near Lviv, they can stay in their country.

Father Roman Prokopets, an Eastern-rite Catholic priest and chaplain at the House of Mercy Orphan Care Center, said that while the displaced people and the volunteers who help them are from different regions of the country, three things unite them: “Love for their homeland is one; sacrifice is two; willingness to help is three.”

Asked by a reporter what she would do when the war is over and Ukraine is victorious, Tetiana Payovska, who fled from the heavily bombed city of Kharkiv, said, “I would hang flags all over the house (and) kiss my native land.”

The preschool at the House of Mercy was converted into a shelter and now has about 20 guests, Father Prokopets told Catholic News Service. “We had to make a kitchen from scratch in this house and equip a bomb shelter.”

Sofia Vasylechko, who had volunteered at the House of Mercy before the Russian invasion Feb. 24, said she knew displaced people would be seeking shelter there, so she went to help.

“I asked myself: What do I live for?” she said. “I realized that just living and achieving my own goals, doing everything I want is not enough for me.”

“Now I feel needed, and, in my opinion, this is the meaning of my life,” she said.

Franciscan Father Mykola Orach, pastor of the Latin-rite Church of St. Anthony, has turned a parish house into a shelter for up to a dozen people.

Payovska is one of them. After two bombs landed near her home, she said, they grabbed a few clothes and their documents and ran to the train station.

Hundreds of other people did the same. Father Orach said the displaced people all report that “it was a struggle to get on the train at the station. Then they spent a day or more in difficult conditions on the train, standing in carriages,” although “they tried to find a place for the children so that at least they could lie down.”

In Lviv, Payovska said, they were offered shelter and a warm meal, even though “we did not even want to eat after such events.”

Oleg Peniuk, pastor of Lviv Central Baptist Church, said his community initially made room for 30 people displaced by the war, but now they are hosting 75. Parishioners volunteer to help.

Tymofei Skorobagach, a youngster from Kyiv, noted, “there are also child volunteers.”

His mother, Natalia Skorobagach, said, “Pillows, blankets — everything was given to us. We have something to eat, plenty of food, the children can play in the playroom.”

Father Petro Terletskii, an Eastern Catholic priest who teaches at the Ukrainian Catholic University in Lviv, said volunteer work always has been part of the program for students and, after Russian annexed Crimea in 2014 and helped start the war in Eastern Ukraine, students began looking for ways to help, for example, by “providing medical care, protective equipment for the military, helping with technical and material needs.”

Some of the students, he said, come from the areas under constant Russian fire.

“This means that students and their relatives are direct victims,” he said. “The administration decided right away to provide dormitory accommodation for relatives from those areas of this military horror.”

Father Orach said that what is at stake in the war is Ukraine’s desire “to be part of the European community, part of European civilization.”

“Unfortunately, the price of that struggle is extremely high,” he said. While Europeans may “underestimate” the value of their civilization and democratic values, “our people here in Ukraine, our military, are paying for it. They pay for it with their lives.”

Reporting by Voznyak Production in Lviv for Catholic News Service.