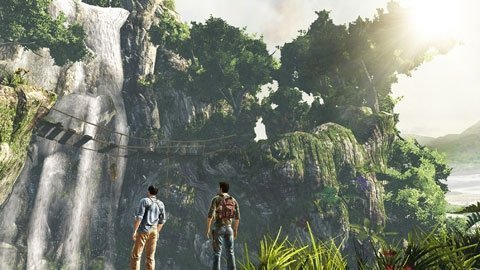 NEW YORK — Whenever a new console hits the market, it’s a safe bet that the manufacturers behind it are on the lookout for a big "launch title" — a game so compelling it will convince players to part with their (or their parents’) hard-earned cash beginning on day one.

And it’s easy to see why.

The treasure hunting-themed "Uncharted" series — of which "Golden Abyss" is the fourth installment — has been massively popular on the PlayStation 3, and a portable edition seems to make sense, especially with the Vita’s unmatched processing power. The promise of a handheld "Uncharted" — as well as the delicious graphics shown in previews — may thus have had the mouths of even the most cynical players watering.

Set in Central America before the events of the first game, this entry focuses on bumbling but loveable protagonist Nathan Drake and his search for the remains of an ancient Christian sect that may or may not have possessed valuable trinkets ripe for plunder.

Accompanied by feisty sidekick Marisa Chase, and series favorite Victor "Sully" Sullivan, Nate must battle armed thugs determined to prevent discovery, not only of the treasure, but also of the fate that befell those who went before our intrepid explorers.

Although decked out with pseudo-religious window-dressing, the story contains little of genuine concern to players of faith. Talk of ancient sects and Gnosticism may initially raise red flags. But these elements ultimately amount to little more than vague ramblings about a sect of Arian bishops and their quest for loot of various kinds.

While jumping and climbing feats constitute the main substance of the gameplay, these are interspersed with some cover-based shooting. The violence, however, is not only relatively bloodless; it’s also set within the context of Drake and co. defending themselves from villainous opponents. Consequently, "Golden Abyss" is far less objectionable than any number of its competitors.

From a technical perspective, the Vita version is absolutely red-hot. The graphics are easily the best ever to grace a handheld console, and the Vita’s two touchscreens and gyroscopic capabilities are put to good (if sometimes gimmicky) use.

"Golden Abyss" also offers excellent value for money. The campaign is long and is also made replayable by the ability to go back and earn awards by collecting hidden articles and taking accurate pictures of certain sights.

Perhaps in an effort to produce what they take to be believable characters, the developers have unfortunately chosen to pepper their dialogue with significant amounts of profane and gritty language. Taken together with the elements of violence outlined above, these vocabulary issues mark "Uncharted" as territory only adults can be advised to explore.

The game contains relatively restrained but frequent gun and hand-to-hand combat, recurring bouts of profanity, much crude and crass language and some sexual innuendo. The Catholic News Service classification is A-III — adults. The Entertainment Software Ratings Board rating is T — Teen.