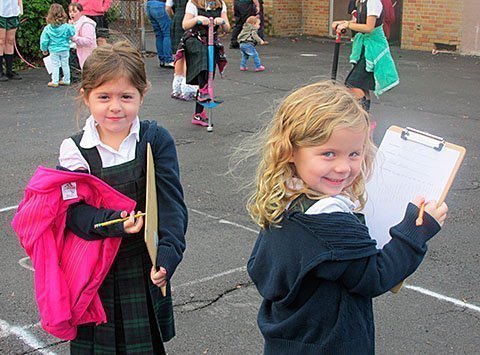 First-graders Bailey Post (left) and Abigail Post take notes on the activities of other students during the Oct.18 Unique-A-Thon at St. Joseph School in Auburn.

On Oct. 18 Anthony S. Cook III, superintendent of the Diocese of Rochester’s Catholic schools, headed to St. Joseph School in Auburn on a very important mission: He had to give middle-school science teacher Ethan Brown a buzz cut.

Giving a haircut to school teachers is not a typical part of Cook’s daily routine. This slightly unorthodox task was part of the school’s first-ever Unique-A-Thon, through which students raised money for their school while showcasing their individual gifts and talents. Parents and family members who visited St. Joseph that day saw students doing everything from jumping rope and hopping on pogo sticks to piecing puzzles together and drawing butterflies.

"We had kids doing everything imaginable. We had a lot of fun," remarked Susan Nedza, principal at St. Joseph.

The idea for the Unique-A-Thon was born of a desire to hold a school fundraiser that would involve every student. The school’s faculty and staff members also wanted to find a way to celebrate each student’s individual gifts, which they believe is a key way to prevent kids from bullying each other.

When the school year started in September each child in preschool through eighth grade was asked to think about what tasks or activities he or she particularly enjoyed or was especially good at. Each student was able to choose one activity and submit it to Nedza for approval. Nedza, for her part, said she approved almost all of the activities except for a few that were either dangerous or exceptionally messy. After children received Nedza’s approval for their chosen activities, they solicited pledges from their family members and friends. A donor could either pledge a specific total amount to the student or donate a certain amount for each time that student completed his or her chosen activity.

Some students chose to shoot as many baskets or do as many somersaults as they could during the Unique-A-Thon, while others chose to blow as many bubbles or read as many pages as they could. St. Joseph’s teachers even got in on the fun, with some promising to complete as many math problems as they could during the Unique-A-Thon, and others choosing somewhat more drastic feats. Kindergarten teacher Denise Sochan agreed to have her long hair cut during the event and donated to Locks of Love in exchange for as many pledges as she could get. Brown agreed to have his signature spiky hair buzzed in exchange for pledges as well, and he and Sochan entered into a friendly competition to see who could raise the most money for the school.

St. Joseph’s kindergartners were eager to support their teacher, so Sochan put a box in the kindergarten room to collect their spare change.

"It was fun. They were so eager to come up and put their little change in my box," she recalled.

Many students in Brown’s eighth-grade homeroom were eager to see their teacher get his hair cut, too. When the morning of reckoning finally rolled around on Oct. 18, many of them relished the spectacle of watching the superintendent shear their teacher’s spiky locks. The girls especially seemed to get a kick out of the mermaid-adorned sheet draped around their teacher’s neck, Nedza said.

When the last bit of hair had been swept up and all of their pledges had been tallied, Sochan brought in $201 for the school. She narrowly edged out Brown, who brought in $185 for his efforts. The entire event raised more than $1,100 for the school, Nedza said.

After their teachers had been shorn it was time for the students to break out the bikes, Hula-Hoops, puzzles and musical instruments and participate in their own chosen activities. For about an hour and a half the school was filled with the sounds of music and laughter.

"There were lots of kids doing different talents. We had instruments in every corner of the hall. You could walk through the halls and hear a violin or a saxophone or a trumpet," Nedza said.

Several students chose to use their talents at counting to keep track of their peers’ efforts and record the results, and some of the older students helped the younger kids and shuttled them between rooms and activity stations. Eighth-grader Claire Rejman said she thoroughly enjoyed watching the first- and second-graders as the older students completed their activities.

"They were laughing and giggling. It was really cute," Claire said

The oldest of six children, Claire said she enjoyed watching her younger siblings playing with their friends and seeing the whole school community — including her father and many other parents — come together.

"I kind of liked how we brought the whole community together for a fun little morning. It just kind of showed how we all have different talents and how we’re all unique in different ways," she said.