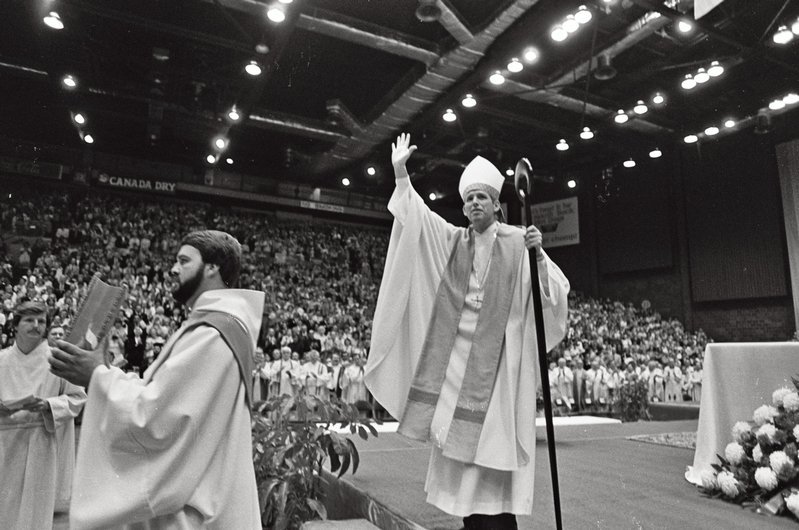 Bishop Emeritus Matthew H. Clark is shown on the day of his installation in 1979.

Becoming a seminarian as a young teen. Leaving behind a budding career as an attorney. Ministering on a pair of continents half a world apart. Overseeing a diocese for 33 years.

Despite the diversity of these paths, they all led to the same place — priestly ordination — for this year’s jubilarians in the Diocese of Rochester.

For Bishop Emeritus Matthew H. Clark, his journey began rather subtly in childhood. The idea of a priestly life had appealed to him but “never in any great, intensive way,” he recalled. “It became stronger, I think, toward the latter years of high school, but once again it was not in the front of things.”

Thoughts about the priesthood eventually moved to front and center, spurring him to leave college and enter seminary en route to being ordained a priest in 1962. Fifty-five years later, Bishop Clark has lived out his vocation in remarkable fashion, owning the second-longest tenure of any bishop in diocesan history — from 1979 until his resignation upon his 75th birthday in 2012.

Father Joseph Catanise also experienced a delayed awareness of his vocation. Although he had considered the priesthood growing up, he fell away from the church while in college before becoming reinvigorated in his faith through a teaching stint at the former St. Mary School in Waterloo. He later completed law school and began practicing law in Seneca Falls, seemingly set on building a legal career — until he landed in the hospital from stress and sensed that Jesus was calling him to follow a different path.

“Laying there, I had a lot of time to think: ‘Is the Lord calling me to be a priest?’” Father Catanise recalled. It turned out that the answer was yes; he was ordained 35 years ago and is nearing the end of his 12th year as pastor of St. Leo Parish in Hilton.

Father Catanise acknowledged that his plans to become a priest caught family members by surprise. In fact, the night before he was to leave for seminary, his father and brother implored him to take more time before making that life-changing commitment.

“Then my mother came in and said, ‘What is your heart telling you?’” he recalled. “I said, ‘My heart is saying go to St. Bernard’s.’ She said, ‘Then that’s what we’re going to do tomorrow morning.’”

Father Pius Pathmarajah, on the other hand, was fairly certain from a young age what his future had in store.

“I felt a sense of service, and then different people kept suggesting to me that I should become a priest. I said, ‘Why me?’” Father Pathmarajah recalled, laughing. “But I started giving it thought, then told my parents I wanted to go to the seminary.”

Father Pathmarajah has now logged 45 years as a priest, having served in the Rochester Diocese since 1998 after 25 years ministering in his native Sri Lanka. He is currently the parochial vicar at St. Charles Borromeo Parish in Greece and a judge in the diocesan Tribunal.

Like Father Pathmarajah, Father Frank Lioi had the idea of a priestly vocation voiced to him at a young age.

“I remember in fifth grade in Catholic school, the nun chose five people to stand in front of the class, including me, and she said, ‘These are going to be priests someday,’” he recalled.

Although he was the only member of the quintet to fulfill the nun’s prediction, Father Lioi has made the most of his priesthood. He ended up entering St. Andrew’s Seminary — only three miles from his home on the city of Rochester’s west side — for his high-school years and became a priest in 1967. Father Lioi, who is celebrating his 50th anniversary of ordination, currently serves as pastor of St. Mary and Ss. Mary and Martha parishes in Auburn.

Despite the nun’s bold pronouncement, Father Lioi said he never felt pushed toward the seminary, but instead saw it as a natural progression from his service as an altar server and church organist at the former St. Francis of Assisi Church. Father Lioi said he was positively influenced by his pastor, Msgr. Joseph Cirrincione, who was well known throughout the diocese for his longtime role as founder and host of the Family Rosary for Peace radio show.

Father Pathmarajah said he was influenced by Jesuit clergy in Sri Lanka who served the South Asian island nation, and by what the Catholic faith represented to him overall.

“I was impressed by the sense of service that the church offered the people in terms of education, in terms of helping bring up good families and children,” he explained.

Father Pathmarajah said he feels great fulfillment from having provided that same service during his 45-year priesthood both in Sri Lanka and the United States.

“I learned from the Jesuits how you can find God’s presence in all people,” he remarked. “You can always find joy in meeting and serving people, and opening up to a wider world.”

Joy also would describe Father Catanise’s feelings about his 35 years of ministry. These days, he said, he’s just as energized as ever about his priestly duties.

“I have never once regretted becoming a priest,” Father Catanise said.
Bishop Clark expressed similar feelings about his 55 years of ordained life.

“I’m filled with gratitude for the blessings over the years — the people I’ve been blessed to meet, and the work I’ve been allowed to do,” he said. “I’m just grateful for it all. It’s been a very rewarding life. I wouldn’t trade it for anything.”