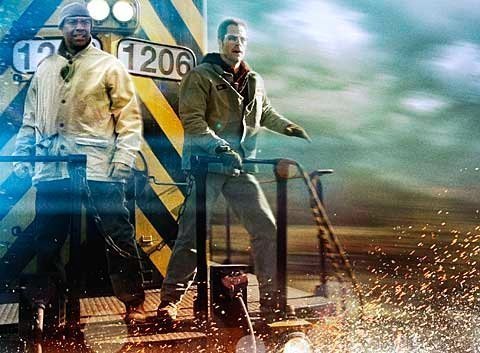 NEW YORK — In a 2001 incident that rail enthusiasts call the "Crazy Eights," an unmanned train carrying, along with other cargo, thousands of gallons of a highly toxic compound called molten phenol hurtled through the Ohio countryside for two hours before finally being brought to a halt. That episode provides the factual basis for "Unstoppable" (Fox), a gripping suspense tale that transcends simple entertainment by showcasing altruism in the pursuit of public safety.

Though a boxcar load of salty language indicates this is not a ride for the kids, adult viewers will find the proceedings kept on track by positive underlying values and by the engaging human dynamic that develops among the main characters.

The fictional emergency unfolds across the Rust Belt areas of southern and central Pennsylvania after inept railroad employee Dewey (Ethan Suplee) makes a series of corner-cutting mistakes that leave a 39-car freight train rolling along at full speed with no one onboard.

Though competent yardmaster Connie Hooper (Rosario Dawson) tries to cope with the situation, she is soon overwhelmed by Dewey’s lack of candor about the accident and by the wrong-headed schemes of her supervisor Galvin (Kevin Dunn). A smarmy executive, Galvin is more concerned about limiting his company’s liability than averting a catastrophe.

Through a harrowing process of elimination — early efforts to stop the speeding vehicle result in injury and death — veteran engineer Frank Barnes (Denzel Washington) and novice conductor Will Colson (Chris Pine) find themselves the only ones positioned to intercept the runaway before it reaches a twisting stretch of track running through a densely populated town. Should they fail, unlucky train 777 will almost certainly derail there, spewing its corrosive contents and exploding nearby fuel tanks.

Galvin orders Frank and Will not to interfere, but they persist, aided by the defiant Connie and by savvy Inspector Werner (Kevin Corrigan), a visiting Federal Railroad Administration official.

The initial hostility that divides the main duo — Frank resents young newcomers like Will who consistently displace more experienced workers like himself, while Will feels Frank won’t give a rookie a break — is swiftly dissolved by their shared sense of mission.

Bolstered by adept performances and by the amusing asides in Mark Bomback’s script, director Tony Scott crafts a diverting entertainment solidly founded on Frank and Will’s heroic selflessness as they put their lives on the line for the many strangers whose well-being is in jeopardy.

This nail-biter is further enhanced by themes supporting marriage and family. Thus, Will struggles to overcome the consequences of his uncontrollable, sometimes violent jealousy, which has caused his wife to leave him, while widower Frank works to maintain his relationship with his much-loved daughters.

The film contains a few scenes of graphic injury, about a dozen uses of profanity, at least one instance of the F-word and frequent crude or crass language. The Catholic News Service classification is A-III — adults. The Motion Picture Association of America rating is PG-13 — parents strongly cautioned. Some material may be inappropriate for children under 13.

Mulderig is on the staff of Catholic News Service. More reviews are available online at www.catholicnews.com/movies.