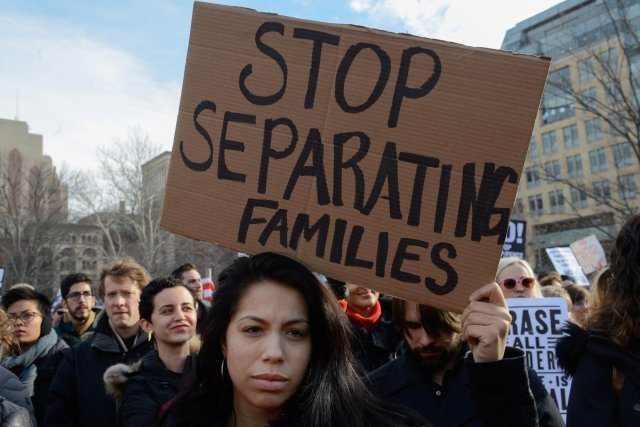 WASHINGTON (CNS) — People had been on edge for a while. You could feel the tension rise in immigrant neighborhoods in the U.S. as news of the first immigration raids under the Trump administration began in early February.

Then news of unusual detentions, some involving battered women and students who had been protected under previous policies, set off panic.

A variety of communities, from the Irish to Latinos, worry that the roundups mark the beginning of what President Donald Trump promised in his campaign for the presidency: to deport the country’s estimated 11 million unauthorized immigrants.

Responding to the fears, Spanish-language television network Telemundo hosted a prime-time show Feb. 12: "Immigration, Trump and Hispanics." The show featured activists, lawyers, children of deported parents and relatives, along with advice about what to do if government officials come knocking. The publication IrishCentral almost daily has been posting stories about raids in Latino communities sprinkled with some assurances, but also a few worries about the immigration status of some 50,000 unauthorized Irish immigrants in the U.S.

In a recent post on its website, the National Alliance for Filipino Concerns said that of the more than 4 million Filipinos in the U.S., "1 million are undocumented and Philippine officials in Washington D.C. recently reported that more than 300,000 could be facing deportation due to Trump’s anti-immigrant policies."

Whether the recent raids and detentions are routine or whether they’re part of a new effort is unknown. Officials from the U.S. Department of Homeland Security, which directs Immigration and Customs Enforcement, also known as ICE, said the February raids that resulted in more than 680 arrests are "routine." But later, Trump said they were part of a new effort. About 75 percent of those arrested in the raids near Los Angeles, Chicago, Atlanta, San Antonio and New York City, the agency said, had been convicted of crimes, but it did not say who made up the other 25 percent. Some worry that it included students and women who had previously been protected from deportation through programs such as the Deferred Action for Childhood Arrivals, known as DACA, and the Violence Against Women Act, which protects victims of domestic violence and sexual assault.

In a wide-ranging Feb. 16 news conference after announcing his pick for labor secretary, Trump talked about a "crackdown on sanctuary cities," said a "nationwide effort to remove criminal aliens" had begun, and that he had ordered an end to the "catch and release policy" that allowed unauthorized immigrants caught by officials to go free while they await a hearing. He also announced the creation of "a new office in Homeland Security dedicated to the forgotten American victims of illegal immigrant violence, of which there are many," he said.

In attempting to answer a question about the future of some 750,000 DACA beneficiaries who were brought as minors to the U.S. without legal permission, he said, "DACA is a very, very difficult subject for me," and "you have these incredible kids in many cases, not in all cases, in some cases they have DACA and they’re gang members and they’re drug dealers, too. But you have some absolutely incredible kids." He said, "I find it very, very hard doing what the law says exactly to do and the law is rough," but he didn’t say how he would address the situation other than it would be with "heart."

The announcement came just a day after Catholic bishops whose dioceses are on the U.S.-Mexico border met Feb. 13-15 in Texas in the Diocese of Brownsville. They visited an immigration detention center as well as a church-run facility that helps migrants.

In a statement, the border bishops said they could sense the "pain, the fear and the anguish" migrants are undergoing and asked that they be treated with respect and dignity "regardless of their migration condition."

All of this came in a week of incidents carrying the narrative that no one is safe from deportation. In Alexandria, Virginia, the pastor of a church denounced actions of ICE agents who arrested in mid-February a group of homeless men leaving a hypothermia shelter his church operates. In Seattle, a 23-year-old with no criminal record and protected by the DACA program was detained Feb. 10. In early February in Texas, ICE agents showed up to a protection order hearing and arrested a woman who was about to testify against her alleged abuser. The Associated Press reported Feb. 17 that the president is considering using the National Guard to detain unauthorized immigrants, a charge the White House quickly denied.

ICE reportedly canceled a meeting with the Congressional Hispanic Caucus as the lawmakers were trying to find answers to the incidents. While all of them involve Latinos, other immigrant groups are expressing on social media anxiety in their communities. Some of it was manifested as Trump spoke of them by those who took to the streets in "A Day Without Immigrants" protests against the immigration measures he has proposed and his promise to build a wall between the U.S. and Mexico. Restaurants and businesses closed across the country and schoolchildren boycotted classes, but Trump said he was pressing ahead and was in the process of "beginning to build the promised wall on the southern border." He said it would be a "great wall," not one "like they have now which is either nonexistent or a joke."

The Catholic bishops who met along the border, without mentioning Trump or his proposals, said they wanted to build "bridges, rather than the walls of exclusion and exploitation."

Sister Norma Pimentel, a member of the Missionaries of Jesus, who is executive director of Catholic Charities of the Rio Grande Valley in the Brownsville Diocese, said during a Feb. 15 town hall that those who work along the border had started seeing that something was different. One of the centers that helps migrants had been seeing about 300 to 350 people a day seeking shelter and food after being released by immigration officials. Now they see between 50 and 75 a day, she said.

"It’s unfortunate that this is happening because these families come so eager to find a place that’s safe, where they feel protected, and unfortunately they find themselves in detention facilities where they feel hopeless, not knowing what’s going to happen to them."

Sister Pimentel, along with Jesuit Father James Martin, participated in the town hall as part of the "Build Bridges, not Walls" campaign sponsored by the Washington-based Faith in Public Life. The campaign is taking place Feb. 17-24 and asks those wishing to support immigrants and refugees to organize prayer events, call their local politicians, attend town halls and educate others about the plight of migrants during the campaign.

Father Martin, who is a book author and editor at large for the Jesuits’ America magazine, spoke of the Holy Family, how they once were refugees, too, and how the Bible throughout calls on Christians to help "the stranger."

"Jesus says that how we care for the stranger is a kind of a litmus test for whether we get into heaven and he says ‘whatever you did for the least of these, you did to me,’" he said. "That includes the stranger."

It’s also part of a consistent pro-life ethic, Father Martin said. "If you’re for an unborn child, who’s in the womb of a migrant woman, are you (in support) of that child’s safety and health after that child is born?"