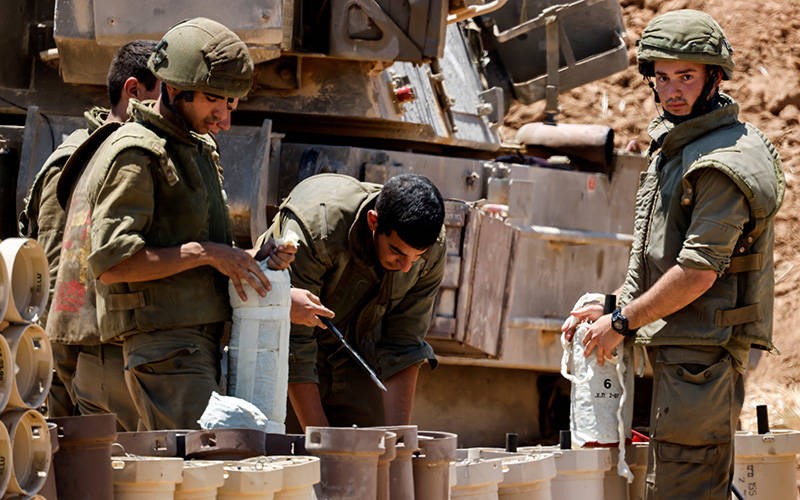 Israeli soldiers check artillery shells in an area near the border with Gaza, in southern Israel, May 13, 2021. (CNS photo by Amir Cohen/Reuters)

WASHINGTON (CNS) — The chairman of the U.S. bishops’ Committee on International Justice and Peace called on Israelis and Palestinians to end the violence in Jerusalem and Gaza that has claimed dozens of lives and left hundreds of people injured.

“The maiming and killing of one’s neighbor only serves to demonize one’s adversary and deepen passions that divide and destroy,” Bishop David J. Malloy of Rockford, Illinois, said in a May 13 statement released by the U.S. Conference of Catholic Bishops.

In calling for peace between Israel and the Islamic political party Hamas, which rules the Gaza Strip, Bishop Malloy cited the words of Pope Francis, who on May 9 expressed concern over the ongoing clashes between Palestinians and Israelis in Jerusalem.

“I invite everyone to seek shared solutions so that the multireligious and multicultural identity of the Holy City is respected and fraternity prevails,” the pope said then. “Violence begets violence. Enough with the clashes.”

He also said bishops were “saddened that simmering tensions erupted into violence in the Holy Land.”

The statement comes in the wake of the most violent fighting in several years between Israel and Palestinian militants in the Gaza Strip.

The violence has left at least 83 Palestinians, including 17 children and seven women, dead and more than 500 wounded, Gaza’s Health Ministry said May 13. The same day, the Associated Press reported seven fatalities in Israel, including a soldier killed while patrolling the Gaza border and six civilians; one was a 6-year-old.

In addition, Israel has imposed stiff gathering restrictions during Ramadan. Palestinians have been protesting since April, and clashes have turned increasingly violent.

Following a May 10 confrontation at Jerusalem’s Al-Aqsa Mosque, militants in Gaza sent rockets into Israel. In response to the rocket attacks, Israel launched airstrikes, sent more troops to the border and called up military reservists.

Bishop Malloy said the U.S. bishops have long supported upholding the Status Quo of the Holy Places, including the Al-Aqsa Mosque. The status quo is an understanding among religious communities regarding nine shared religious sites in Jerusalem and Bethlehem, West Bank.

“We affirm the need to adhere to international law in settling these disputes, rightly rooted in moral law, the rights of nations, and equal dignity of every people,” Bishop Malloy said.

The statement said the U.S. bishops join Pope Francis, Archbishop Pierbattista Pizzaballa, Latin patriarch of Jerusalem, and others who have “called on the international community to intervene in the promotion of a just peace in the Holy City.”

“We especially offer our prayers for all those who rightfully call the Holy Land home, as it is through them any lasting peace will come,” he said. “May the primary adversaries in this conflict be given the guidance, strength and courage that only comes from on high to build trust amidst those who are eager for belligerence. With our suffering Lord as our model, we renew our enduring commitment to our brothers and sisters in the Holy Land.”