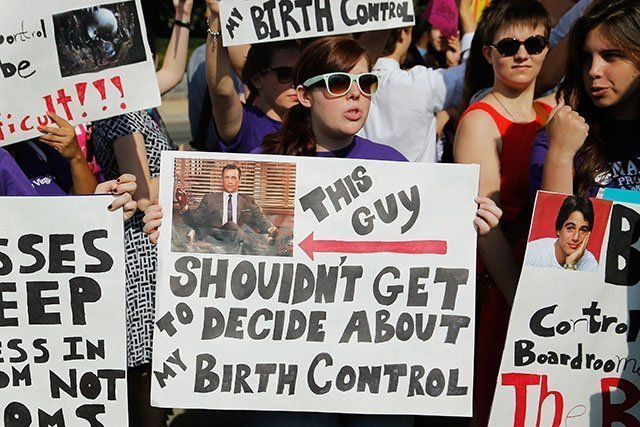 Supporters of legal abortion and the federal contraceptive mandate demonstrate outside the U.S. Supreme Court in Washington June 30. The court ruled that owners of closely held corporations can object on religious grounds to being forced to cover contraceptives by the government.

WASHINGTON (CNS) — The Supreme Court’s June 30 ruling that certain businesses, based on their religious objections, can be exempted from a government requirement to include contraceptives in their employee health insurance coverage means "justice has prevailed," said two U.S. archbishops.

"We welcome the Supreme Court’s decision to recognize that Americans can continue to follow their faith when they run a family business," said Archbishop Joseph E. Kurtz of Louisville, Kentucky, president of the U.S. Conference of Catholic Bishops, and Archbishop William E. Lori of Baltimore, chairman of the U.S. bishops’ Ad Hoc Committee for Religious Liberty.

The court in its 5-4 ruling said that Hobby Lobby and Conestoga Woods, the two family-run companies that objected to the government mandate that employees be covered for a range of contraceptives, including drugs considered to be abortifacients, are protected from the requirement of the Affordable Care Act under the Religious Freedom Restoration Act.

Activists on both sides of the issue gathered outside the U.S. Supreme Court on a hot Washington morning awaiting the decision and when it was announced, supporters hailed it as a religious liberty issue and opponents called it a setback to women’s health care.

Although Catholic leaders and other religious groups hailed the decision as a victory for religious freedom, they also said the issue is not resolved since the government mandate requires nonprofit organizations such as Catholic charities, hospitals and schools to provide contraceptive coverage.

The USCCB statement of Archbishops Kurtz and Lori noted that the court left the door open about the cases currently winding their way through the courts objecting to the government’s accommodation that they direct a third party to provide the required contraceptive coverage.

"The court clearly did not decide whether the so-called ‘accommodation’ violates RFRA when applied to our charities, hospitals and schools, so many of which have challenged it as a burden on their religious exercise. We continue to hope that these great ministries of service, like the Little Sisters of the Poor and so many others, will prevail in their cases as well," the statement said.

Gregory Erlandson, president of Our Sunday Visitor Publishing in Huntington, Indiana, also welcomed the ruling, adding: "Our hope is that this decision bodes well for those nonprofit religious organizations, including Our Sunday Visitor, which are seeking relief from the onerous requirements of the HHS regulations."

In 2012, Our Sunday Visitor, one of the largest Catholic publishing houses in the country, joined with the Diocese of Fort Wayne-South Bend, Indiana, the University of Notre Dame and other Catholic organizations in filing federal lawsuits to block the mandate.

Erlandson added, "Our hope is that the courts will affirm that there is no state interest so compelling as to force religious organizations such as Our Sunday Visitor to violate their religious beliefs or risk financially devastating fines."

The court’s ruling noted that if Hobby Lobby had lost its case, the company would have been subjected to fines of up to $475 million, or $36,500 per year per affected employee. If the company had dropped all employee health care coverage, it would have been fined $26 million a year.

Mark Rienzi, senior counsel for the Becket Fund for Religious Liberty, the religious liberty law firm that represented Hobby Lobby, the family-owned Oklahoma-based retailer, before the Supreme Court, told reporters after the ruling that he thinks the court’s decision bodes well for similar pending cases of nonprofit organizations.

He noted that the opinion written by Justice Samuel Alito includes a footnote reference to the Little Sisters of the Poor’s lawsuit, which he said indicates that the "government accommodation is not here for long."

The Little Sisters of the Poor religious order has asked the 10th U.S. Circuit Court of Appeals to extend an injunction blocking enforcement of the federal contraceptive mandate.

The Supreme Court’s decision points out how the government has "effectively exempted" some religious nonprofit groups from the contraceptive mandate and that to qualify for the accommodation, such an employer must self-certify as nonprofit religious group with religious objections to contraceptive coverage; the self-certification form triggers the insurance company that administers their health plan to provide the objectionable coverage to their employees.

Catholic and other groups who object to the coverage on moral grounds say even with the accommodation, they are still involved in objectionable coverage.

The ninth footnote in Alito’s opinion states that "in a separate challenge to this framework for religious nonprofit organizations, the court recently ordered that, pending appeal, the eligible organizations be permitted to opt out of the contraceptive mandate by providing written notification of their objections to the Secretary of HHS, rather than to their insurance issuers or third-party administrators."

Rienzi’s take on that footnote is that if the government thinks something is important — such as the provision of birth control coverage — it can provide it and cannot have a "compelling interest" to "crush" groups that object to paying for it.

He said the Hobby Lobby ruling makes it clear how family-operated businesses can operate within the Affordable Care Act and said the court’s decision will likely be the "controlling opinion going forth" for nonprofit entities’ health care coverage.

John Vile, dean of the University Honors College at Middle Tennessee State University and co-editor of the Encyclopedia of the First Amendment, called the decision a "genuine win for religious freedom" and for those who wrote the RFRA and the Religious Land Use and Institutionalized Persons Act of 2000. He said both acts were designed to extend religious freedom beyond the narrow confines the court had previously tried to impose.

He also pointed out that even though the court agreed that the government had an "important governmental interest" in protecting the health of women, it had not used the "least restrictive means" in accomplishing this goal since it had already made provisions for providing coverage for women who worked in nonprofit organizations with religious objections and for plans that it grandfathered in without contraceptive coverage.

Vile said he does not agree with the dissenting justices who said the decision had "startling breadth" and instead pointed out that Justice Alito was careful to limit the decision to the facts at hand, and his emphasis on "least restrictive means" provides leeway in cases where other means of accomplishing governmental objectives are unavailable.

Belmont Abbey College in North Carolina was the first organization to sue the federal government over the HHS mandate, said Bill Thierfelder, its president, so the June 30 ruling "is an especially meaningful victory that sends a clear message to the current administration that our freedom is a God-given right and cannot be usurped by any group or individual."

He added: "We are inspired to fight on and we are confident that the resolution of our case will further help to ensure religious freedom for all."