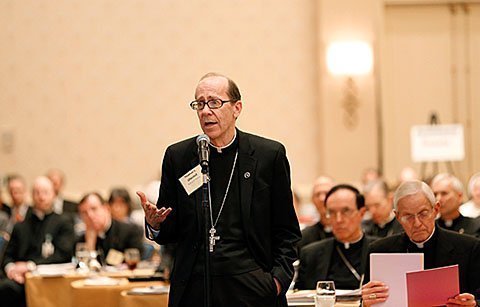 Bishop Thomas J. Olmsted of Phoenix speaks from the floor during the U.S. bishops' meeting in Baltimore Nov. 11.

New York Cardinal Timothy M. Dolan of New York, in his final address as president of the U.S. Conference of Catholic Bishops, stressed the importance of protecting religious freedom around the world and outlined action steps the bishops could take on the issue.

In his Nov. 11 remarks, he urged the bishops to create an awareness of "today’s new martyrs" persecuted for their beliefs by writing and talking about the issue in diocesan newspapers, blogs, speeches and pastoral letters. He also said the bishops should contact their political leaders and urge them to make the protection of "at-risk Christians a foreign policy priority."

"Our good experience defending religious freedom here at home shows that, when we turn our minds to an issue, we can put it on the map," Cardinal Dolan said. "It’s time to harness that energy for our fellow members of the household of faith hounded for their beliefs around the world."

The cardinal cited the words of Pope Francis, who, in a Sept. 25 general audience, invited the world to exam its conscience with regard to the plight of Christians around the world. The pope asked people to ask themselves if they were indifferent to the suffering of Christians and if they offered prayers for them.

The pontiff’s questions must be answered not just by individual believers, but by the bishops "collectively as a body," Cardinal Dolan said.

Archbishop Carlo Maria Vigano, apostolic nuncio to the United States, reflected on Pope Francis’ call to have a church built on Christ’s love.

"The Holy Father wants bishops in tune with their people," he said. When he met with the pope this summer, he noted, the pontiff made "a special point of saying that he wants pastoral bishops, not bishops who profess or follow a particular ideology."

In a brief report on the extraordinary Synod of Bishops on the family, called by Pope Francis for next October, Cardinal Dolan said it has been drawing great interest from everyday Catholics, many of whom are anxious to weigh in on questions the Vatican has sent out in preparation for the session.

He said he was awaiting clarification from the Holy See about how preparatory material such as the answers to a questionnaire sent to the world’s bishops’ conferences, will be used.

Several bishops said they had already begun consulting with their priests’ councils or other diocesan organizations about ways Catholics can respond to the Vatican’s questions.

In a report on USCCB efforts to promote and defend traditional marriage, San Francisco Archbishop Salvatore J. Cordileone said the Supreme Court’s ruling that rendered the federal Defense of Marriage Act unconstitutional and the Senate’s passage Nov. 7 of the Employment Non-Discrimination Act put the legal defense of marriage "at a critical point in this country."

The archbishop, who heads the U.S. bishops’ Subcommittee on the Promotion and Defense of Marriage, said the DOMA decision is now being used to judicially challenge marriage laws in more than a dozen states that still recognize marriage as the union of one man and one woman.

He also noted that "ENDA-like laws have contributed to the erosion and redefinition of marriage at the state level."

The bishops voted 203-17, with five abstentions, to extend through 2016 a "Call to Prayer for Life, Marriage and Religious Freedom," originally intended to coincide with the now-ended Year of Faith and itself scheduled to end with the feast of Christ the King Nov. 24.

A report on the work of Catholic Relief Services highlighted what the agency is doing for survivors of Super Typhoon Haiyan.

The agency has already committed $20 million in emergency aid, with the funds expected to come from a second collection the agency asked U.S. bishops to undertake in their dioceses before the end of the year. Bishop Gerald F. Kicanas of Tucson, Ariz., chairman of the CRS board, said the collection could be taken in dioceses the weekends of Nov. 16-17 or Nov. 30-Dec. 1.

CRS president Carolyn Woo said the agency’s goal is to serve about a half million people.

Bishop Kicanas said it is expected that some funds will be set aside for the reconstruction of Catholic churches, schools and agencies, but the immediate need was for relief services.

He stressed that CRS partnerships with secular and government organizations are vital in the delivery of humanitarian services around the world. Such partnerships are carefully vetted, he said, before they are finalized to assure that what work is covered is in line with Catholic teaching.

The bishops were also updated on the reconstruction work the church was sponsoring in Haiti in its recovery from the 2010 earthquake.

Archbishop Dennis M. Schnurr of Cincinnati, chairman of the Committee on National Collections, said: "The hard work of collaboration and reconstruction has taken time, but it is now bearing fruit," in the rebuilding of homes, churches and hospitals. U.S. Catholics gave more than $80 million toward this effort.

In a report on the U.S. bishops’ priorities for 2013-16, Archbishop J. Peter Sartain of Seattle, chairman of that committee, said the bishops were continuing to "make important progress" in their efforts to protect the life and dignity of the human person, to strengthen marriage and family life, to promote religious liberty, and to improve faith formation and sacramental practice.

Retired Archbishop Joseph A. Fiorenza of Galveston-Houston, a former president of the U.S. bishops, asked if the priorities could also include recognition of the priority for the poor outlined by Pope Francis.

The U.S. bishops’ National Advisory Council, a 48-member group that meets in tandem with meetings of the bishops’ Administrative Committee, gave "strong agreement" to the major items on the bishops’ agenda for the fall meeting and added a few more items members thought the bishops should consider.

Renee Miller, the council’s chair, said the group felt a concerted effort should be made "to make Catholic education more available to underserved populations" and it also had concerns about the federal government’s Common Core State Standards initiative "and its impact on (the) Catholic school curriculum."

The council also resubmitted a recommendation "for comprehensive and long-term mentoring and training programs," Miller said, to support newly ordained priests as they transition from the seminary to active ministry.

They heard a preliminary presentation on liturgical texts on marriage and confirmation, which were to be voted on Nov. 12.

By voice vote, the bishops approved the advancement of the sainthood cause of Mother Mary Teresa Tallon, who founded the Parish Visitors of Mary Immaculate, an order focused on contemplation and door-to-door, personal ministry.

Contributing to this report were Mark Pattison, Patricia Zapor and Dennis Sadowski in Baltimore and Carol Zimmermann in Washington.