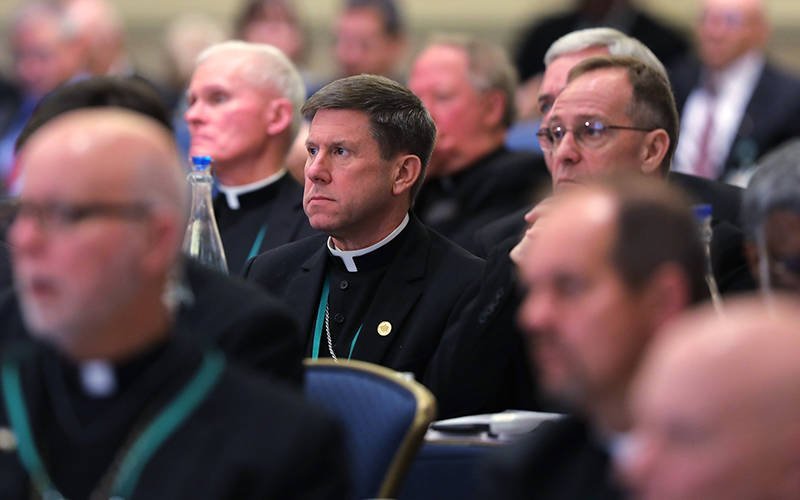 U.S. Catholic bishops attend a Nov. 11, 2019, session during the fall general assembly of the U.S. Conference of Catholic Bishops in Baltimore. The bishops’ 2021 spring assembly June 16-18 will take place virtually due to concerns about the coronavirus pandemic. (CNS photo by Bob Roller)

WASHINGTON (CNS) — When they gather virtually for their annual spring assembly June 16-18, the U.S. bishops will be asked to approve the drafting of a formal statement on the meaning of the Eucharist in the life of the Catholic Church.

They also will be asked to approve three translations by the International Commission on English in the Liturgy for use in U.S. dioceses of the United States, to endorse the sainthood causes of two military chaplains revered for their heroism in World War II and the Korean War, and approve drafting of a national pastoral framework for youth and young adults.

Earlier this year, the bishops voted to approve convening this June meeting in a virtual format given the challenges of meeting in person with the ongoing COVID-19 pandemic.

The “Action Item” asking the bishops to approve the drafting of a teaching document on the reception of Communion is likely to draw the most debate — and media attention — starting with a vote to formally approve the meeting agenda shortly after the assembly is called to order.

In early May, Los Angeles Archbishop José H. Gomez, president of the USCCB, received an unprecedented letter from 67 bishops appealing for a delay in a discussion during the bishops’ upcoming spring general assembly on whether to prepare a teaching document about the Eucharist.

The signers wrote that “we respectfully urge that all conference-wide discussion and committee work on the topic of eucharistic worthiness and other issues raised by the Holy See be postponed until the full body of bishops is able to meet in person.”

In a May 22 memo to fellow bishops, Archbishop Gomez explained that USCCB rules require that the body of bishops first be asked whether to issue a document on a particular topic.

The bishops’ letter and Archbishop Gomez’s memo follow an increasingly public debate among the bishops about Catholic politicians who support keeping abortion legal and whether they should be denied access to the Eucharist.

Archbishop Gomez in his memo said the USCCB Administrative Committee approved a request from Bishop Kevin C. Rhoades of Fort Wayne-South Bend, Indiana, that time be included on the spring assembly agenda for discussion on drafting a teaching document on Communion.

The process, the archbishop said, involves the creation of an “Action Item” for the bishops to consider. “Importantly, the Action Item does not ask the body to approve a final statement, but only whether drafting of a text may begin,” he said.

The bishops’ meeting agenda also includes a report from the National Review Board, which advises the USCCB and the Committee on the Protection of Children and Young People about matters of child and youth protection, specifically on policies and practices.

There also will be a vote to approve a “National Pastoral Framework for Marriage and Family Life Ministry in the United States: Called to the Joy of Love” and a vote to authorize the development of a new formal statement and comprehensive vision for Native American/Alaska Native Ministry.

The sainthood candidates whose causes the bishops will be asked to approve are Father Joseph Verbis Lafleur and Capt. Leonard LaRue, who became Benedictine Brother Marinus of St. Paul’s Abbey in Newton, New Jersey. Both have the title “Servant of God.”

Father Lafleur, a priest of the Diocese of Lafayette, Louisiana, was a World War II chaplain who gave his life while saving others on a Japanese prison ship.

Survivors recall the priest’s heroic efforts helping his fellow POWs escape the hull of the ship under Japanese gunfire by pushing them up to the deck at the cost of his own life. He died Sept. 7, 1944.

In October 2017, Father LaFleur was honored posthumously with the Distinguished Service Cross and Purple Heart.

LaRue and the crew of the S.S. Meredith Victory piloted 14,005 refugees to safety during the Korean War from the port of Hungnam, now part of North Korea. The mission has been called a “Christmas Miracle.”

In early December 1950, the S.S. Meredith Victory’s duties involved delivering supplies to anti-communist forces in Korea, which included a stop in Hungnam. In the midst of the heavy fighting on land, LaRue, who also was a World War II veteran, volunteered the Merchant Marine cargo ship to participate in the rescue operation — the refugees’ last hope of escape. The captain entered religious life after the Korean War.

The vote tallies on the action items, news updates, texts of addresses and presentations and other materials will be available on the USCCB website.

Contributing to this story was Dennis Sadowski.