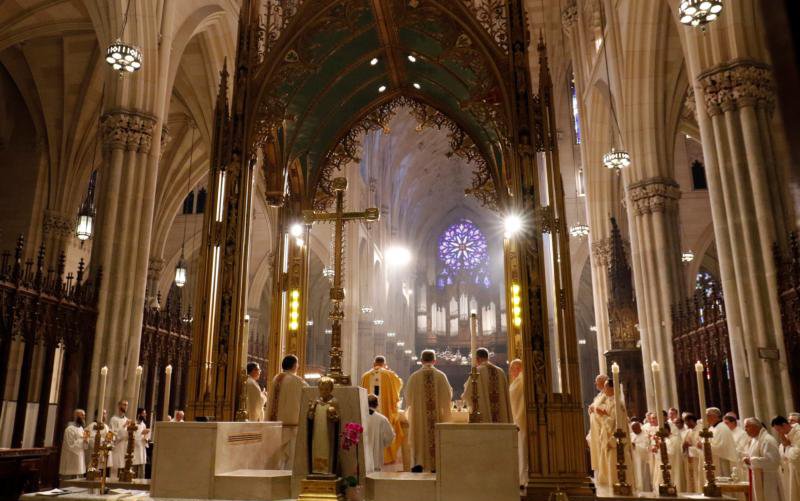 Msgr. Robert T. Ritchie, rector of St. Patrick’s Cathedral in New York, oversaw a recent, extensive restoration that included replacement of the traditional fire suppression system in the 140-year-old church. He told Catholic News Service one of his greatest fears during the project was that fire would break out. The rector said he prayed daily that the building and workers would be safe from fire.

“St. Patrick’s has some similarities to Notre Dame, with its attic of ancient logs,” he said. “Of course, ours are not 800 years old, but it’s still a concern, because it’s wood and it’s so dry.”

Msgr. Ritchie said there has been a camera in the attic for many years to provide early visual warning of fire.

While planning for the restoration, architects and designers looked for an alternative to the existing water sprinkler system in the attic. “It would have put out any fire, but the water might have collapsed the ceiling, because it’s made of wood, plaster and paint,” he said.

The rector said the New York City Fire Department conducts a major annual inspection of the cathedral. In addition, firefighters make three or four other visits each year to practice getting up into the attic and maneuvering there. Coincidentally, members of the fire department performed a practice drill April 15, the day of the Notre Dame fire.

He said the New York City Fire Department responded to a recent minor fire caused by an ember from a stick used to light a votive candle. Although the fire was put out quickly with a fire extinguisher, it tripped the alarm. Firefighters arrived and checked to make sure there were no lingering issues.

The Cathedral of the Holy Cross in Boston was rededicated April 13 after a major restoration. Michael Kieloch, director of communications for the 150-year-old cathedral, said as part of the restoration, the electrical and fire systems of the church were completely upgraded. The electrical contractor found “mostly 1940s wiring grafted onto 1920s wiring,” he said.

The wood frame church with a stone exterior now has its first sprinkler system, which covers it from attic to basement, Kieloch said. In addition to new fire detection and alarm systems, fire retardant insulation was pumped into empty spaces, such as under the raised sanctuary.

Boston firefighters have been oriented to the new systems and are familiar with all the access points, but Kieloch said they needed no directions: the local fire station is located directly behind the cathedral. And Kieloch said Boston’s fire marshall attended the rededication ceremony ‚Äì as a guest.

Retired New York City Fire Department Capt. Tom Roche watched news coverage of the Notre Dame fire with the practiced eye of a 25-year firefighting veteran and the horror of a worshipper who attended daily Mass at the cathedral during his last visit to Paris.

He said at Notre Dame it appeared that fire accumulated in crevices under the high roof where it was difficult for firefighters to reach and suppress. “They would have needed a great deal of water pressure to reach the flames and several men on each hose to hold the lines in place,” Roche said.

Firefighters in the United States would be similarly challenged with a cathedral fire. “Once a fire has as much headway as the one at Notre Dame had, there is danger that the building will collapse. A fire chief is almost required by conscience to pull his men out before that happens,” Roche said.

Prevention is key to preserving life and property in a church fire, he said. Regular inspections are conducted and firefighters make it a point to be familiar with the houses of worship in their station areas.

Roche said the fire chaplain and firefighters at Notre Dame made a heroic effort to retrieve the Blessed Sacrament and relics. He said priests and firefighters share a similar mission to serve and save.

Msgr. Walter Rossi, rector of the Basilica of the National Shrine of the Immaculate Conception in Washington, said the likelihood of a devastating fire there is “slim because we are basically built of brick, mortar and marble.” He said he confirmed the low risk with his maintenance supervisor the day after the Notre Dame blaze.

The shrine is almost 100 years old. Reflecting rules in place at the time of its construction, it does not have sprinklers throughout, although a new television production room and other renovated areas meet modern fire safety codes.

Msgr. Rossi said at the shrine, as at other churches, there is a protocol in place to remove the Blessed Sacrament and secure relics in the event of a fire.