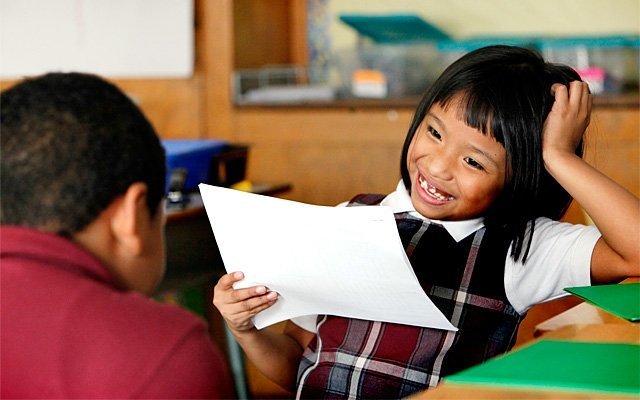 Second-graders Maria Elena Moso-Fuerte and Kionne Holmes work together on an assignment Oct. 17, 2014, at St. Ann School in Chicago.

NOTRE DAME, Ind. (CNS) — U.S. Catholic schools will not become extinct if a group of education professionals realize their vision for the struggling system.

U.S. Catholic schools have been held up as beacons of learning since the 19th century. That’s why academic pioneers at Catholic universities are trying to revitalize the largest nonpublic school system in the country.

As many as 2,000 Catholic schools have closed in the U.S. since 1999 and many in the education system point to the dwindling number of teachers who are vowed men and women religious as one of the root causes.

"I don’t think that this is a time for a sort of hospice mentality because the (men and women) religious aren’t here in the same numbers," said John Schoenig, teacher formation director for the Alliance for Catholic Education program, known as ACE, at the University of Notre Dame in Indiana. "I think to the contrary, it’s a renaissance."

Notre Dame developed the ACE program more than two decades ago to address the needs of struggling Catholic schools throughout the country. Other U.S. Catholic universities established similar programs for the same reason.

In the middle of the 20th century, the U.S. Catholic school system enjoyed its highest enrollment period and largest numbers of elementary and secondary academies at the same time the Catholic Church experienced robust communities of men and women religious.

As the numbers of vowed men and women religious steadily dropped in the later decades of the 20th century, fewer were available to teach in the Catholic schools, forcing those institutions to hire lay teachers. In order to pay salaries they didn’t have to budget for in the past, school leaders had to raise tuition, often pricing out lower-income families, said Christian Dallavis, senior director of leadership programs for ACE.

"We’ve gone from a world in which three out of five teachers in Catholic schools would be vowed religious to a world where 96 percent are lay and that’s happened in a few decades," Dallavis told Catholic News Service during an interview at the University of Notre Dame. "It’s been a challenge for us. As a system, we haven’t developed any ways of really responding to that."

However, the ACE program has been designed to address the void left by dramatically decreased vowed religious in the teaching and school leadership roles, at least with its individual school partners.

The best known is the teaching fellowship program, which annually serves more than 13,500 students at 120 Catholic schools in 31 U.S. communities.

Students at Notre Dame are invited to apply for this fellowship program. Upon acceptance and graduation, they are assigned to an under-resourced Catholic school, given a small stipend, teamed with a mentor teacher at the school and provided with a place to live in a house with other ACE teachers, Schoenig said.

"It’s challenging. It’s a lot of work because this program is also a master’s program," said Jessica Jones, a fourth-grade ACE teacher assigned to Maternity of the Blessed Virgin Mary School in Chicago. "So, we’re full-time teachers and full-time students."

Jones is in her second year of the two-year program. The 2013 graduate and Chicago native teaches during the school year, takes online coursework at night and spends her summers back at Notre Dame for more classes to earn her master’s degree in education.

After giving her students an in-class assignment to work on, Jones sat down in her classroom for an interview with CNS and described the experience as "eye-opening," challenging, sometimes exhausting, but ultimately rewarding.

ACE appealed to Jones because she is a product of the Catholic education system and wanted to be a part of a program designed to create a prosperous future for it.

"It’s a great program and we really are dedicated to trying to help the state of Catholic education in this country," the 22-year-old ACE teacher told CNS. "It’s a really important thing. The principles of faith help build communities and bring people of the community together. I’m glad to be a part of something that is trying to grow that idea."

Having one or more ACE teachers helps the Catholic school financially, because their stipend is a fraction of a regular teacher’s salary, but they also bring an infusion of energy and state-of-the-art teaching techniques and instructional strategies, said Benny Morten, principal at St. Ann School in Chicago and a one-time ACE teacher himself.

"What I’ve noticed since we became an ACE school is that not only is Notre Dame sending us teachers with great training and knowledge, they are sending us teachers who bring a wonderful sense of spirituality to their work," Morten told CNS during an onsite interview at his school. "We’re able to incorporate that energy, knowledge and spirituality throughout the school in our daily instruction."

In addition to being an ACE teaching fellow alum, the principal of St. Ann also went through what is now Notre Dame’s Mary Ann Remick Leadership Program, designed to create future leaders in the Catholic educational system.

The program not only provides its fellows with skills in instructional leadership, executive management and school culture, it also helps them develop a unified charism to foster within all activities at the schools in their charge, Dallavis said. "We are trying to duplicate that environment in our leadership program."

"That was something the vowed religious did so well and it created an atmosphere that resulted in successful students who also translated their faith into every aspect of their lives," he said.

In addition to the teaching and leadership programs, ACE was called on to help three failing Catholic schools in Tucson, Arizona. ACE officials designed a complete restructuring and brought in ACE teaching fellows, which has been credited with a turnaround that ultimately saved the schools from closing.

"We are establishing Notre Dame ACE academies in places where there are (state-supported) parental choice programs, so tax credits, scholarships or vouchers are available," he said. "We also see these programs as the way that Catholic schools will be able to sustain our legacy of service to low-income communities."

"In a large measure, what we are looking for is people with the talent, imagination and zeal, Schoenig said, "to put children on the path to college and heaven."