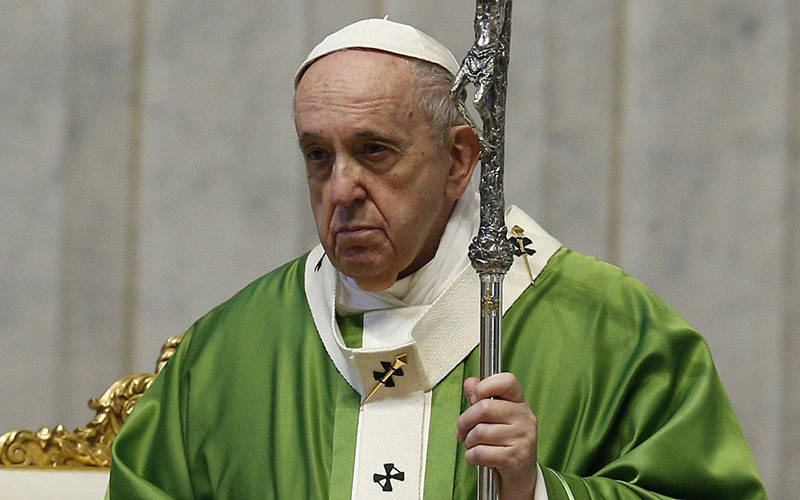 Pope Francis holds his crosier as he celebrates Mass marking World Day of the Poor in St. Peter’s Basilica at the Vatican Nov. 15, 2020. Still hospitalized after colon surgery, Pope Francis will lead the midday recitation of the Angelus prayer July 11, 2021, from his room on the 10th floor of Gemelli hospital.(CNS photo by Paul Haring)

“It is with gratitude that we received the news of the success of the Holy Father’s surgery this past weekend,” the archbishop said in a July 9 statement. “Even as he is recuperating in the hospital, our Holy Father, in his role as our shepherd has selflessly expressed his closeness to those who are sick and in most need of care.”

The Vatican press office said July 9 Pope Francis has resumed working and celebrated Mass for his caregivers in the small chapel that is part of the suite of rooms reserved for the popes at Rome’s Gemelli hospital. “He walked in the corridor and resumed his work, alternating it with moments of reading texts.”

The pope was hospitalized July 4 for planned colon surgery, which took place that evening.

“In solidarity with the universal church, we offer our prayers for all who are ill and in need of God’s healing touch, and for those who work tirelessly in health care to bring comfort and medical care to the afflicted,” Archbishop Gomez said in his statement. “Mary, Mother of Healing and Hope, intercede for us!”

Catholic bishops, clergy and laity all over the world have tweeted messages of prayer for Pope Francis and good wishes for his full recovery from his surgery. Many tweets included prayers for all those suffering from an illness.

“Lord, may our shepherd and all those in the hospital for healing in these days find strength and comfort in your love,” Archbishop Gomez tweeted July 5.

Pope Francis will lead the midday recitation of the Angelus prayer July 11 from his room on the 10th floor of Gemelli hospital, announced Matteo Bruni, director of the Vatican press office.

“Following the brief episode with a slight temperature (July 7), the Holy Father is without fever,” he added July 9.

The morning after running a temperature, the pope’s doctors performed a CT scan of his abdomen and chest as well as routine exams to ensure that he was not suffering from an infection, a common complication of intestinal surgery. The results of the scan and exams were negative, the Vatican press office had said July 8.