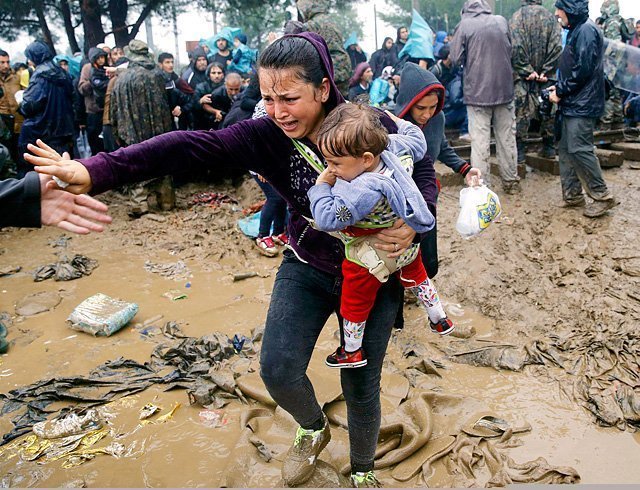 A Syrian refugee woman cries as she carries her baby through the mud to cross the border from Greece into Macedonia near the Greek village of Idomeni Sept. 10.
By Catholic News Service
WASHINGTON (CNS) — The U.S. Catholic Church "stands ready to help" in efforts to assist refugees fleeing war-torn countries in the Middle East, said the president of the U.S. Conference of Catholic Bishops Sept. 10.
Archbishop Joseph E. Kurtz of Louisville, Kentucky, also that Catholics in the U.S. and "all people of good will should express openness and welcome to refugees fleeing Syria and elsewhere in order to survive."
Tens of thousands of people from Syria and other countries are "fleeing into Europe in search of protection," he said, adding that images of those "escaping desperate" circumstances "have captured the world’s attention and sympathy."
The archbishop noted that Catholic Relief Services, the U.S. bishops’ overseas relief and development agency, has been providing humanitarian aid to refugees in the Middle East and Europe, and in the U.S., he said, "nearly 100 Catholic Charities agencies and hundreds of parishes" assist refugees coming into the country each year.
Archbishop Kurtz’s statement follows Pope Francis urging Catholics in Europe to respond to the needs of refugees entering their countries.
He expressed solidarity with the pope, the bishops of Syria, the Middle East and Europe, "and all people who have responded to this humanitarian crisis with charity and compassion."
The archbishop called on the U.S. government "to assist more robustly the nations of Europe and the Middle East in protecting and supporting these refugees and in helping to end this horrific conflict, so refugees may return home in safety."
The Obama administration announced that it was planning to accept 10,000 Syrian refugees in the coming fiscal year. However, an AP story said they are "already in the pipeline" waiting to be admitted to the U.S. and are not part of the flood of people currently entering Eastern Europe to make their way to other countries.
"In the Gospel of Matthew, Jesus, Mary and Joseph flee the terror of Herod," Archbishop Kurtz said in his statement. "They are the archetype of every refugee family. Let us pray that the Holy Family watches over the thousands of refugee families in Europe and beyond at this time."
Copyright © 2023 Catholic News Service, Inc. All rights reserved. Linking is encouraged, but republishing or redistributing, including by framing or similar means, without the publisher's prior written permission is prohibited.