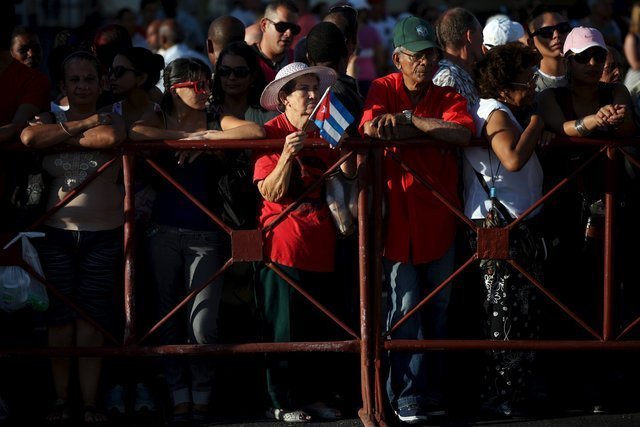 HAVANA (CNS) — With Havana Harbor’s bright blue waters and a trio of vintage U.S. cars parked along the Malecon framing the scene, Secretary of State John Kerry officially reopened the U.S. Embassy in Cuba Aug. 14, marking the end of more than 54 years of fractured diplomatic relations.

Since the United States broke off diplomatic relations and imposed a trade embargo on Cuba, among the world’s transitions have been the rise and fall of the Berlin Wall, the end of the Vietnam War and restoration of full relations with that former enemy, Kerry noted.

"For more than half a century, U.S.-Cuban relations have been suspended in the amber of Cold War politics," Kerry said. "In the interim, a whole generation of Americans and Cubans have grown up and grown old. The United States has had 10 new presidents. In a united Germany, the Berlin Wall is a fading memory. Freed from Soviet shackles, Central Europe is again home to thriving democracies."

He observed that the trade embargo still stands, blocking most commercial relationships and tourism, but ending that is up to Congress, "a step we strongly favor."

Among the invited guests for the brief ceremony on the plaza outside the embassy was Havana’s Cardinal Jaime Ortega Alamino. In his remarks, Kerry repeated the acknowledgement of both the U.S. and Cuban leaders that the intervention of Pope Francis and Vatican diplomats had been crucial to getting the two sides to resolve the long-standing diplomatic freeze.

Among those he thanked in his speech Kerry included Pope Francis and the Vatican "for promoting a new start in relations between our two countries." Kerry was to have a meeting with Cardinal Ortega following the ceremony.

Kerry, the first U.S. secretary of state to visit Cuba since 1945, was joined for the brief trip to Havana by a handful of members of Congress, first- and second-generation Cuban Americans who support the diplomatic thaw and the three now-retired Marines who performed one of the last official duties as the embassy was closed in 1961 — removing the U.S. flag.

The three men ceremoniously handed three Marines in dress uniforms a folded U.S. flag which they attached to the flagpole and raised as the national anthem was played by a Marine band.

Telling the story of President Eisenhower’s decision to close the embassy amid Cuba’s post-revolution alliance with the Soviet Union, Kerry described the last few U.S. citizens to leave the building, the three Marine guards, "Larry Morris, Mike East, and Jim Tracey. As they stepped outside, they were confronted by a large crowd standing between them and the flagpole. Tensions were high. No one felt safe. But the Marines had a mission to accomplish. Slowly, the crowd parted as they made their way to the flagpole, lowered ‘Old Glory,’ folded it, and returned to the building. Larry, Mike and Jim had done their jobs, but they also made a bold promise — that one day they would return to Havana and raise the flag again."

In the intervening years, the tall, 1950s-era building on prime Havana real estate has served as the U.S. Interests Section, while the limited unofficial diplomatic efforts filtered through the Swiss government.

U.S. President Barack Obama and Cuban President Raul Castro surprised the world in December by announcing that they had agreed to pursue renewed diplomatic relations. Cuba reopened its embassy in Washington — also a repurposed interests section — in July.

Copyright ©2015 Catholic News Service/U.S. Conference of Catholic Bishops.
www.catholicnews.com. All rights reserved. Republishing or redistributing of CNS content, including by framing or similar means without prior permission, is prohibited. You may link to stories on our public site. This copy is for your personal, non-commercial use only. To request permission for republishing or redistributing of CNS content, please contact permissions at cns@catholicnews.com.