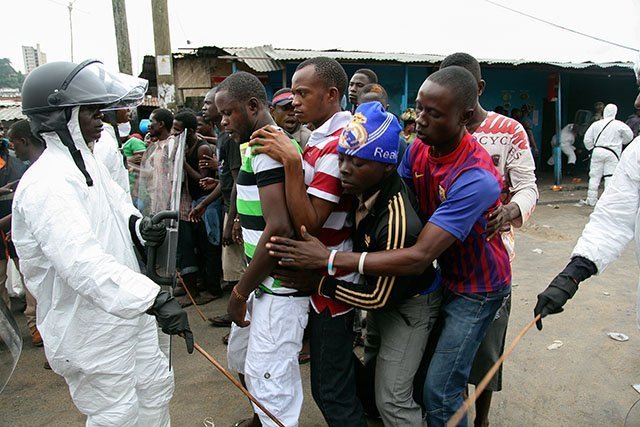 Liberian police in protective clothing control residents of Monrovia's West Point neighborhood waiting for food rations to be handed out Aug. 21. Church workers say hunger and panic are major problems in Liberia and Sierra Leone as neighborhoods are sealed off in an effort to curb the spread of Ebola.

WASHINGTON (CNS) — A medical missionary worker who is an Ebola survivor said Sept. 16 that the U.S. government can do its part to address the Ebola crisis by increasing its financial support for humanitarian organizations that are already working on the ground in Africa and are acquainted with the local people.

"It’s important that we don’t just march in there with our military and take over, but we partner with NGOs (nongovernmental organizations) like Samaritan’s Purse," Dr. Kent Brantly told a Senate hearing on Capitol Hill in Washington.

"So it’s a partnership and we’re using people like the survivors from Ebola … who can go out in a culturally appropriate way and … distribute the needed personal protective equipment" to stop the proliferation of Ebola victims, he said.

Brantly testified at a joint hearing of the Senate Committee on Health, Education, Labor and Pensions and the Subcommittee on Labor, Health and Human Services, Education and Related Agencies on the global challenge and public health threat of the Ebola virus epidemic in West Africa.

Speaking on the same panel as Brantly was Ishmael Alfred Charles, from Freetown, Sierra Leone. He is the program manager in his country for the Catholic-run Healey International Relief Foundation, which supports the rebuilding of Sierra Leone’s health care system.

Other witnesses addressed the technical and medical aspects of the epidemic.

Dr. Kent Brantly, a medical missionary with Samaritan’s Purse and an Ebola survivor, testifies before a House Foreign Affairs Subcommittee hearing on "global efforts to fight Ebola" on Capitol Hill in Washington Sept. 17. A day earlier he testified on the same issue before a Senate hearing.

Brantly contracted Ebola in July while working with the Christian humanitarian organization Samaritan’s Purse. He was the organization’s medical director in Liberia, there to help stop the rapid spread of the virus. At the Senate hearing, Brantly said he was grateful for the opportunity to testify.

"As a survivor it is not only my privilege but it is my duty to speak out on behalf of the people of West Africa," he said. He addressed a similar House hearing on Ebola the following day.

On Sept. 16, President Barack Obama spoke at the Centers for Disease Control and Prevention in Atlanta and announced a major expansion of the United States’ response to the epidemic, which involves the U.S. military.

"At the request of the Liberian government, we’re going to establish a military command center in Liberia to support civilian efforts across the region. … And our forces are going to bring their expertise in command and control, in logistics, in engineering," he said. "We’re going to create an air bridge to get health workers and medical supplies into West Africa faster."

The main goals of this endeavor, Obama said, are to control the outbreak, to address the effects of it on local economies, to coordinate a broader global response and to build up the public health systems of the affected countries. He noted the importance of working with NGOs to secure personnel, supplies and funding on a global level.

"We’re going to bring more nations together to strengthen our global health security so that we can better prevent, detect and respond to future outbreaks before they become epidemics," he said. "We also need NGOs and private philanthropies to work with us in a coordinated fashion in order to maximize the impact of our response."

To date, Ebola has affected about 5,000 people; at least 2,400 people have died from it. Most of those sick with the virus have been in Liberia, Sierra Leone and Guinea, but AP reported that it also has reached Nigeria and Senegal.

Catholic Relief Services, the U.S. bishops’ overseas relief and development agency, voiced its support for Obama’s plan. CRS has committed financial and human resources to the prevention and management of Ebola in West Africa.

"The situation in West Africa requires an unprecedented response, and we appreciate President Obama’s commitment to scale-up U.S. government resources so the current outbreak can be contained," said Michael Ghebrab, the organization’s country representative in Sierra Leone. "The president’s plan will meet some of the urgent need for medical equipment, logistical support and training health personnel that will help save lives in the short-term."

At the Senate hearing, Charles, a former child soldier, said the Ebola epidemic is the biggest crisis Sierra Leone has faced since the end of its civil war in 2002.

"Today, there is a general atmosphere of fear," he said. "I was able to survive the war. But I fear that this is going to be worse than the war."

Charles called for the continued support of the U.S. government in the fight against Ebola, especially in Sierra Leone, a country with an already fragile social, political and economic situation.

"In a country with 70 percent illiteracy, schools have been closed indefinitely because of Ebola," he said. "Many companies are laying off staff amidst the slowdown in commerce, restrictions on travel and decreases in other economic activity.

"As a result, households are struggling with food shortages and increased costs due to panic buying. Families go hungry when the bread winner dies, gets sick or loses his or her job."

Brantly reiterated the need for families and communities to better understand the virus and how to prevent it.

"We need to start educating people right now in their communities about how to safely care for their family members who are hiding at home, dying from Ebola, and are ashamed or scared of their situation," he said. "We cannot contain the disease without addressing this problem head on."

The worldwide response to the outbreak, Brantly said, has thus far been "sluggish and unacceptably out of step." Obama’s pledge to do more, he said, is a step in the right direction.

"Only now are we seeing a significant commitment to a solution," Brantly said. "It is imperative that these words are backed up by immediate action."