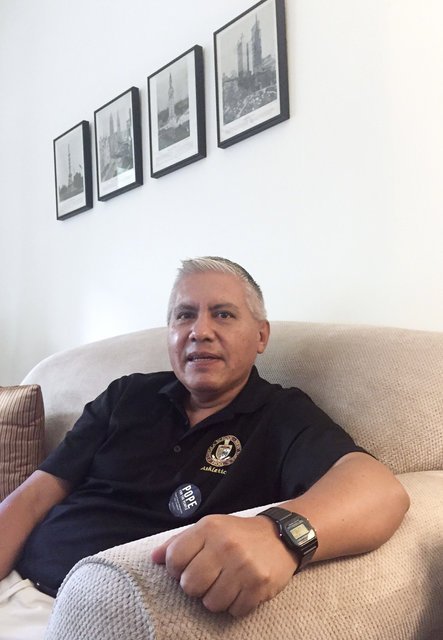 Jesuit Father Hernan Paredes said that Pope Francis exemplified servant leadership when they were roommates in the early 1980s in Buenos Aires, Argentina. He is pictured at viewing party held in New York Sept. 24 during the pope's address to Congress.

NEW YORK (CNS) — Jesuit Father Hernan Paredes recalled a roommate from the early 1980s, who "was ready to do our laundry, ready to cook for us … ready to embrace us, cry with us." The roommate in Buenos Aires, Argentina, in the early 1980s was also his superior and went on to become Pope Francis.

"It’s servant leadership, doing things for others and helping others," said Father Paredes, an Ecuadorean native now teaching at Loyola School in New York’s Upper East Side, a rather posh part of the city. "If he asked you to do it, he’s done it before."

Father Paredes is among those in the Society of Jesus welcoming a fellow Jesuit to the United States for the first time as pope.

It’s an important visit for American Catholics as an especially popular pope is challenging the country to care for creation and provide attention for the poor and disadvantaged.

But it’s important for the order, too, as the Pope Francis’ simple style and call to take the church to the periphery shows the influence on his papacy of Ignatian spirituality and the thinking of the Jesuits, who have at times has been on the outs with the church hierarchy.

"Reaching out to people on the margins has been a Jesuit focus," said Nicholas Napolitano, assistant director for social ministries for the Jesuits’ Maryland, New England and New York provinces. "That this has risen to the top of (the agenda) speaks volumes of the priority of his papacy."

Pope Francis mentioned the margins in an address to a joint meeting of Congress Sept. 24, as he condemned abortion and the death penalty, demanded dignity and acceptance for immigrants and highlighted the plight of the poor.

The Jesuits of the USA Northeast Province prepared for the pope’s arrival in New York with a viewing party of the pope’s Congressional speech — followed by reflections.

"It doesn’t get more basic than the ‘golden rule,’" said one woman in attendance, repeating the pope’s admonishment, "Do unto others as you would have them do unto you."

"Dialogue, that’s the only way we’ll get anywhere, listening to all sides," said another attendee, repeating a common call of the pope, though one not often followed in the country’s polarized politics.

Pope Francis also won points in the audience for the simplicity of his message, which highlighted four prominent Americans as models of virtue: "Abraham Lincoln, Dorothy Day, the Rev. Martin Luther King Jr. and Thomas Merton."

"He put a face on an issue," said Jesuit Father Vincent Cooke, a former provincial in the New York province. "They’ll remember the names after they forgot the message."

Large crowds have gathered for the pope throughout his U.S. trip, which is receiving enormous media attention. Jesuits, again, attribute the pope’s appeal to style and substance.

"There’s a great thirst for inspiring leadership in our country and world," said Father Cooke, who recalled being greeted by future pope in a Jesuit conference in the early 1980s. "There’s been a disappointment with current (leadership.) … We don’t have leaders like Lincoln or the people he mentioned."

With popularity has come some criticism, especially from those in favor of free markets — even though the pope’s speech praised business as a "noble" activity. Jesuits like Father Phil Judge say the criticism represents an opportunity for dialogue.

"I hope he gets a dialogue started," said Father Judge. "Even if they disagree with him, they’ll have to have a respectful conversation."

Pope Francis knows criticism well, having been attacked by past presidents of Argentina and branded their principal political enemy. Ironically, many in the Jesuits have held critical attitudes toward the then-Father Jorge Mario Bergoglio, whose time as provincial in Argentina proved polemic, said Father Paredes.

Father Paredes recalled having issues in some Jesuit circles over the years due to his friendship with Pope Francis.

"Some people thought he had a cult of personality," he said. "In the past, they used to say he was too traditionalist, too conservative" in areas such as his interpretation of St. Ignatius of Loyola — exemplified by the pope’s extreme austerity.

But the pope has changed since being elected in 2013, said Father Paredes, and become a better communicator, less timid and much more prone to smile.

"The Holy Spirit has moved," he said, when asked what happened.