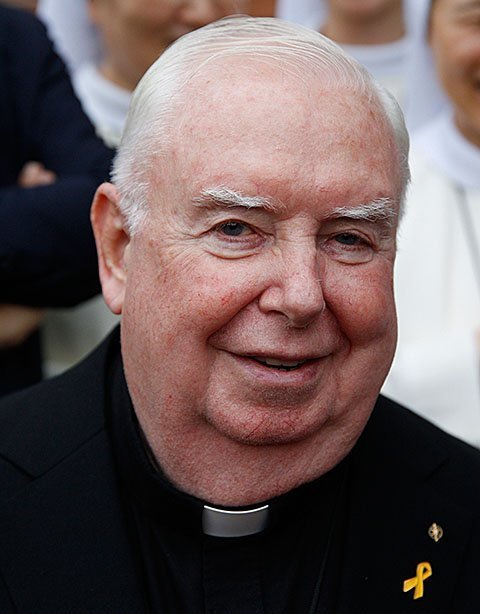 Maryknoll Father Gerard Hammond, a native of Philadelphia who has lived in South Korea since 1960, is pictured waiting to meet Pope Francis during the pope's meeting with the bishops of Korea in Seoul Aug. 14. Father Hammond said that since 1995 he has made 51 trips into North Korea to take humanitarian assistance.

SEOUL, South Korea (CNS) — Since the end of the Korean War in 1953, no Catholic priest has resided in the North of this divided peninsula, where autonomous religious activity is effectively forbidden. And no enemy of the communist regime there is more detested or fiercely denounced than the United States.

Nevertheless, one of the few outsiders to have penetrated the so-called hermit kingdom of the North is an 81-year-old Catholic priest from West Philadelphia.

Maryknoll Father Gerard Hammond, 81, who has lived in South Korea since 1960, first crossed over into the North in 1995 and since then has made 51 trips. During Pope Francis’ Aug. 14-18 visit to South Korea, the pope met Father Hammond and personally thanked him for his work in the North.

Father Hammond says he goes there as an "apostle of peace, an apostle of hope" — not to evangelize directly, which the government would not allow, but to bring humanitarian assistance. That assistance came first in the form of food aid; more recently, in the form of medicines for people with multi-drug-resistant tuberculosis.

The government admits Father Hammond and his colleagues, Catholic and Protestant missionaries supported by the U.S.-based Eugene Bell Foundation, "because we’re putting people back into the working force," he said. They have cured more than 70 percent of their patients, he said, compared with a worldwide cure rate of only 48 percent.

But for Father Hammond, who still serves as superior general for his order in Korea, a trip across the demilitarized zone is not only a chance to help the needy; it is also a "spiritual experience."

The soft-spoken priest describes the moment of taking a sputum sample from a tuberculosis patient in almost sacramental terms.

"You hear the cough of the person," he said. "You give them a cup of water, all that symbolism behind it. They drink the water so they can bring the sputum up. They stand there, and they’re also in a most vulnerable position."

"It’s the most contagious moment," he said. "But that’s what we should be doing as priests anyhow. Why should a married person that’s on the delegation with us or even a North Korean who has a family do that?"

Despite this sort of intimacy, Father Hammond says conversations with patients are highly restricted, and never take place out of earshot of government minders. He says he never talks about religion or politics unless asked, and almost never is.

Yet, since everyone he deals with there knows him to be a priest bearing medicines marked as donations of the Catholic Church, he says his silent witness serves as a kind of "apostolate of presence."

"You’re present to a people whom you cannot speak to and they can’t speak to you, but it’s the old adage, ‘heart speaks to heart,’" he said. "They see compassion. Well, they’re in a country where they’re told that (the late dictator) Kim Jong Il gives them everything. But then they see, well, in this case he isn’t. So you’re also creating a thought pattern in their own life: ‘What do these people help bring us? What are they doing here?’"

Father Hammond is not naive about obstacles to Korean reunification; he speaks in terms of cold-eyed realism about the strategic and economic interests he says make the status quo preferable not only to North Korea but also to China, Russia, Japan and the U.S. Yet he has faith that his efforts are helping promote peace and reconciliation between North and South.

The priest says his visits to the North are also pilgrimages to venerate Catholics killed there over the years, including his Maryknoll confrere Bishop Patrick Byrne, who died in 1950 as a prisoner of the communists during the Korean War.

Poverty in the North is dire, Father Hammond says, though no worse than what he encountered in South Korea upon his arrival 54 years ago: "thousands of refugees, bridges were down, roads were awful, no running water."

Today, South Korea is the world’s 13th-largest economy, with a per capita gross domestic product almost 20 times as large as the North’s. Since the late 1980s, thanks to a political movement in which the Catholic Church played a prominent role, the formerly authoritarian South has also enjoyed a democratically elected government.

Yet prosperity has brought it own woes, the missionary says, which Pope Francis addressed during his visit with repeated calls to help the needy.

"I don’t like to say it, but the church is divided here because of the rich and the poor," Father Hammond said. "With a lot of material progress, the poor get forgotten."