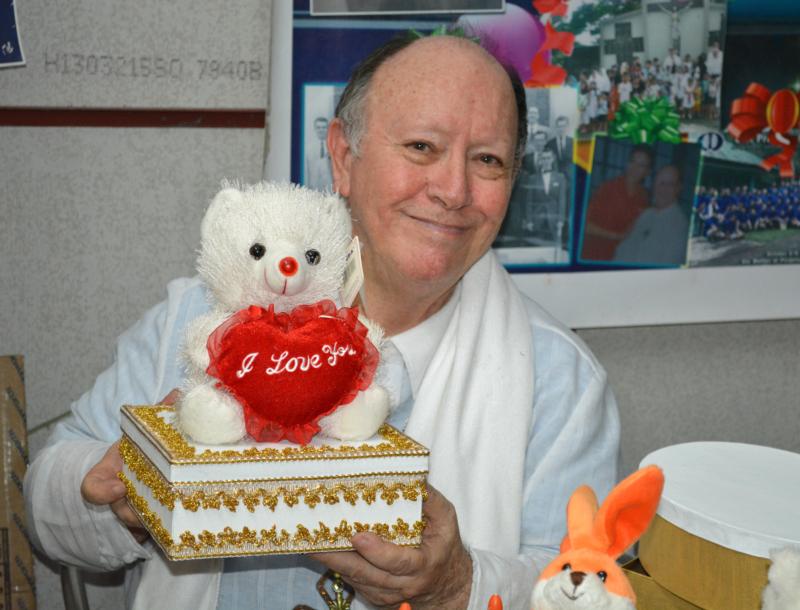 U.S. Oblate Father Richard Pommier, 76, displays one of hundreds of gift boxes he makes in Manila, Philippines, in this March 10 photo.
By Simone Orendain
Catholic News Service
MANILA, Philippines (CNS) — An electric fan blasting air into a tiny workshop lined with shelves of ornate cardboard boxes wrapped in plastic was no match for the sweltering Philippine summer day. Even in the heat, Oblate Father Richard Pommier kept a towel around his neck, to protect against drafts, he said, as he quickly ran a bottle of glue over the edge of a gold-painted box and pressed a thread of gold trim onto it.
The 76-year-old grew up in the tiny town of Currie, Minnesota, and was preparing 350 gift boxes that he would be taking back home with him in May to celebrate his 50th anniversary in the priesthood. He decorated them all himself, using gold paint, gold trim, rhinestones, angels, prayer cards, stuffed animals and any other small ornament — sometimes religious, sometimes not — that could be placed on top of the lids.
"Staying at the Oblate retreat house, we’re pretty far from the malls. I don’t want to go all the way to (the mall to) get gifts," Father Pommier told Catholic News Service. "I take my boxes and I put inside either a stuffed animal, a rosary, some prayer cards, chocolates."
His path from the chilly rural southwest corner of Minnesota to Quezon City, in the capital region of the tropical Philippines, was filled with a love for art and a strong drive to help others "create something beautiful," especially in the midst of conflict and difficulty.
When he was in the seminary, Father Pommier completed a degree in fine arts. In school, he learned about the Philippines through other priests who had gone there and returned with stacks of photos. He also learned much about the island nation from a Filipina who married a Minnesota man. So when it was time to go on his first assignment, he was sent to his first choice, the Philippines.
"Having been able to graduate from fine arts, some people would say, ‘What a stupid preparation for going to the missions.’ But it was so perfect because Filipinos are so talented. (They) can pick up anything and with a little guidance, they do it and they do it well, and they do it with such pride and joy," he said.
Father Pommier recalled what prompted his first major project, which was to have soldiers and their wives in the conflict-torn southern Philippines paint and do cross-stitch work of scenes from each of the prayers of Mary’s litany. He was stationed in a part of the country where Muslim rebel factions were fighting government forces and where settling scores through violence without police or other intervention was common.
One week into his first assignment in 1967 in Central Mindanao, he saw firsthand the violence of the region. A local man from his parish carted over the hacked bodies of four cattle rustlers, who he said were killed by farmers who were tired of their livestock being stolen.
"When they were arranging the bodies, they couldn’t figure out what parts were the arms, the hands," recalled Father Pommier. "It was like a puzzle.
Just ghastly, for this little Minnesota man who had never seen anything like it.
"You deal with these atrocious things by trying to focus on something that’s beautiful and good, just the opposite," he said.
Father Pommier said he had "many other stories" like that, yet he remained in Mindanao for 45 years, 32 of those in Cotabato City, where he headed a project that turned a 17-acre Marian shrine site, ruined by an earthquake, into a grotto and theme park that continues to bring together Christians and Muslims.
Bobby Frisnedi met Father Pommier 25 years ago, when Frisnedi worked in Cotabato as a student on scholarship with the Oblates. He finished his degree and became a high school teacher in metro Manila.
Frisnedi told CNS he had to quit teaching to help out his ailing parents. Soon after his mother passed away, he became the regular caregiver of hospital-ridden Oblates; he also works as an assistant to Father Pommier, living at an Oblate mission house.
"The thing that he always tells me is ‘Learn to share yourself with others, even though you do not know that person,’" said Frisnedi. "Sometimes we only think of giving materially, but no, (you have to share) your time and be a good listener for them."
Five years ago, Father Pommier started his "reduced ministry" as spiritual director to major seminarians in the capital region. He distributes philanthropic donations for a wealthy family in Manila and, of course, he has made and given away or sold, at a minimal cost, his boxes.
"To get a gift handmade from a 76-year old overweight, American priest is like having a cellphone with Mickey Mouse ears. It makes you smile," he said with a big laugh.
Copyright © 2023 Catholic News Service, Inc. All rights reserved. Linking is encouraged, but republishing or redistributing, including by framing or similar means, without the publisher's prior written permission is prohibited.