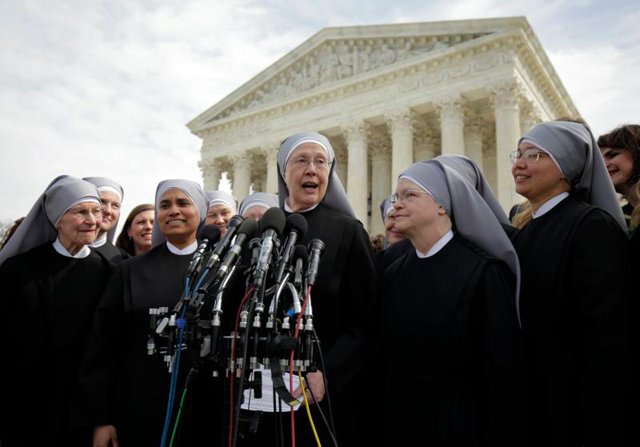 Sister Loraine Marie Maguire, mother provincial of the Denver-based Little Sisters of the Poor, speaks to the media outside the U.S. Supreme Court in Washington March 23 after attending oral arguments in the Zubik v. Burwell contraceptive mandate case.
By Carol Zimmermann
Catholic News Service
WASHINGTON (CNS) — The U.S. Supreme Court May 16 sent the Zubik v. Burwell case, which challenges the Affordable Care Act’s contraceptive requirement for employers, back to the lower courts.
The justices’ unanimous decision, explained in a nine-page unsigned opinion, was based on the information that both sides submitted a week after oral arguments were heard in the case about how and if contraceptive insurance coverage could be obtained by employees through their insurance companies without directly involving religious employers who object to this coverage.