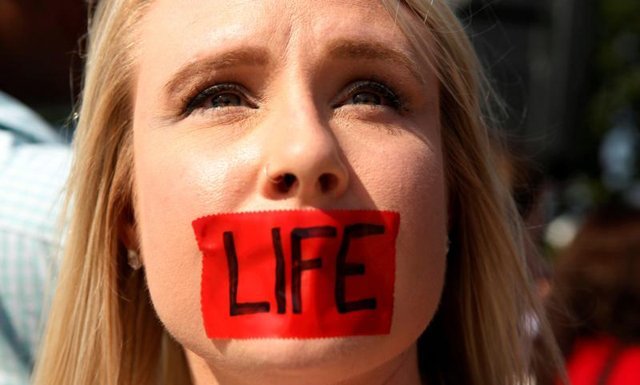 A pro-life supporter stands outside the U.S. Supreme Court June 27 during protests in Washington. In a 5-3 vote that day, the U.S. Supreme Court struck down restrictions on Texas abortion clinics that required them to comply with standards of ambulatory surgical centers and required their doctors to have admitting privileges at local hospitals.
By Carol Zimmermann
Catholic News Service
WASHINGTON (CNS) -– In a 5-3 vote June 27, the U.S. Supreme Court struck down restrictions on Texas abortion clinics that required them to comply with standards of ambulatory surgical centers and required their doctors to have admitting privileges at local hospitals.
The case, Whole Woman’s Health v. Hellerstedt, challenged a 2013 state law, H.B. 2, placing the requirements on the state’s abortion clinics. Opponents of the law claimed the requirements were aimed at closing abortion clinics. But the state and many pro-life advocates maintained that the law protected women’s health.
The U.S. Conference of Catholic Bishops and other religious groups submitted a joint friend of the court brief in the case supporting the Texas law, which was similar to other state laws regulating abortion clinics across the country.
Justice Stephen Breyer, who wrote the opinion, said the restrictions on the clinics "provide few if any health benefits for women, pose a substantial obstacle to women seeking abortions and constitute an ‘undue burden’ on their constitutional right to do so."
"The court has rejected a common-sense law protecting women from abortion facilities that put profits above patient safety," said Deirdre McQuade, assistant director for pro-life communications at the USCCB’s Secretariat of Pro-Life Activities.
She said the Texas law "simply required abortion facilities to meet the same health and safety standards as other ambulatory surgical centers."
McQuade, in a statement issued after the ruling, also said: "Abortion claims the lives of unborn children, and too often endangers their mothers as well. This ruling contradicts the consensus among medical groups that such measures protect women’s lives."
Dissenting votes in the case were from Chief Justice John Roberts and Justices Clarence Thomas and Samuel Alito Jr.
Thomas wrote that the court’s decision "simultaneously transformed judicially created rights like the right to abortion into preferred constitutional rights, while disfavoring many of the rights actually enumerated in the Constitution." He added that the Constitution "renounces the notion that some constitutional rights are more equal than others. … A law either infringes a constitutional right, or not; there is no room for the judiciary to invent tolerable degrees of encroachment."
The U.S. Supreme Court’s use of the words "undue burden" echoes its 1992 ruling in Planned Parenthood vs. Casey, in which it upheld provisions in Pennsylvania law requiring parental consent for minors, a 24-hour waiting period before an abortion, filing of detailed reports about each abortion and distribution of information about alternatives to abortion. It struck down a requirement that married women need to notify their husbands before having an abortion.
In essence, the court said a state may enact abortion regulations that do not pose an "undue burden” on pregnant women.
The phrase was often cited during the March 2 oral arguments in the Texas abortion clinics case where opponents of the state regulations said they were aimed at stopping abortions, because they forced clinics to close, which in turn, they said, puts an undue burden on women seeking abortions who would have to travel farther to find an available clinic.
According to the Guttmacher Institute, a research group that supports legal abortion, 25 states have laws or policies that regulate abortion providers and clinics that perform surgical abortions that it claims "go beyond what is necessary to ensure patients’ safety."
Five states currently require providers of either medication-induced abortion or surgical abortion to have admitting privileges at a local hospital and another 10 require the provider to have either admitting privileges or another type of relationship with a hospital.
In 2015, Arkansas adopted a new restriction that requires only providers of medication-induced abortions to have an agreement with a physician who has admitting privileges at a hospital; the law does not include a similar requirement for providers whose doctors do surgical abortions.
The state of Wisconsin, where federal judges have struck down hospital admitting privileges for abortion clinic doctors, is filing an appeal with the Supreme Court.
– – –
Follow Zimmermann on Twitter @carolmaczim.
Copyright © 2022 Catholic News Service, Inc. All rights reserved. Linking is encouraged, but republishing or redistributing, including by framing or similar means, without the publisher's prior written permission is prohibited.