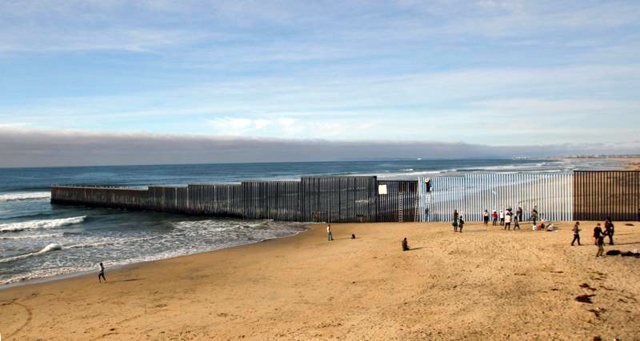 People in Tijuana, Mexico, stand next to a wall separating Mexico and the United States Dec. 10.
By Catholic News Service
WASHINGTON (CNS) — The U.S. Conference of Catholic Bishops is establishing a working group charged with developing spiritual, pastoral and policy advocacy support for immigrants and refugees.
Cardinal Daniel N. DiNardo of Galveston-Houston, USCCB president, has named members of the working group, with the mandate of closely following developments related to immigrants and refugees in the United States. The USCCB Public Affairs Office announced formation of the group Dec. 16.
Archbishop Jose H. Gomez of Los Angeles, USCCB vice president, will chair the group. Members include the chairmen of USCCB committees and subcommittees involved in immigration concerns: Bishop Joe S. Vasquez of Austin, Texas, Committee on Migration; Auxiliary Bishop Nelson J. Perez of Rockville Centre, New York, Subcommittee on Hispanic Affairs; Bishop Frank J. Dewane of Venice, Florida, Committee on Domestic Social Development; Bishop Joseph J. Tyson of Yakima, Washington, Subcommittee on Pastoral Care of Migrants; and Bishop Oscar Cantu of Las Cruces, New Mexico, Committee on International Justice and Peace.
The groundwork for the working group was set during the bishops’ annual fall general assembly in Baltimore when several bishops suggested the conference closely monitor actions by the federal government that affect immigrants and refugees.
In announcing the working group, the Public Affairs Office said the bishops and USCCB staff will be ready to respond to any executive orders and legislation that the new Congress and President-elect Donald J. Trump may introduce.
The working group will inform the efforts of individual bishops in their pastoral responses to immigrants and refugees and recommend appropriate additional efforts as needed, such as the recent day of prayer on the feast of Our Lady of Guadalupe Dec. 12.
Meanwhile, Cardinal Blase J. Cupich of Chicago outlined some of the responsibilities of the working group in a column in the Dec. 11 issue of the Catholic New World, Chicago’s archdiocesan newspaper.
He said the group will look at what is being done pastorally in U.S. dioceses and will share best practices with bishops.
"Particular attention will be given to addressing the economic struggles, alienation, fear and exclusion many feel, along with the resistance to the church’s message regarding migrants and refugees," Cardinal Cupich wrote. "Emphasis will be given to ways we can build bridges between various segments of society."
The working group also will spearhead advocacy, building on existing USCCB efforts, and engage constructively with the incoming administration and Congress, the cardinal said.
The formation of the new entity, which Archbishop Gomez planned to convene weekly, "will send a message to those who live in fear that the Catholic bishops of the United States stand with them, pray with them, offer pastoral support and speak prophetically in defense of their human dignity," Cardinal Cupich wrote.
He added that the Chicago Archdiocese will continue to "walk with all who, given our broken immigration system, live in the shadows. We will advocate for them as well as for refugees seeking a better life for their families."
On Nov. 30, at the end of Mass at St. Agatha of Bohemia Parish in Chicago, Cardinal Cupich told the congregation he had been invited to meet with President Barack Obama Nov. 29, "and the only issue I discussed with him was the executive order granting temporary protection for a large number of undocumented persons."
He told Obama the U.S. Catholic bishops "favor this action but see it only as a first step" to comprehensive immigration reform. The cardinal said he and Obama discussed the need to have some confidentiality provision," so if they register for protection, that information would not be used against them.
"I wanted to tell you today about my discussion with the president," Cardinal Cupich told the congregation, "so that you will know that you can count on me as a good friend of the immigrant community."
National Migration Week is Jan. 8-14.
– –
Editors: More information about the U.S. bishops’ observance of National Migration Week in January and links to various resources can be found at http://bit.ly/1cWdELM.
Copyright © 2022 Catholic News Service, Inc. All rights reserved. Linking is encouraged, but republishing or redistributing, including by framing or similar means, without the publisher's prior written permission is prohibited.