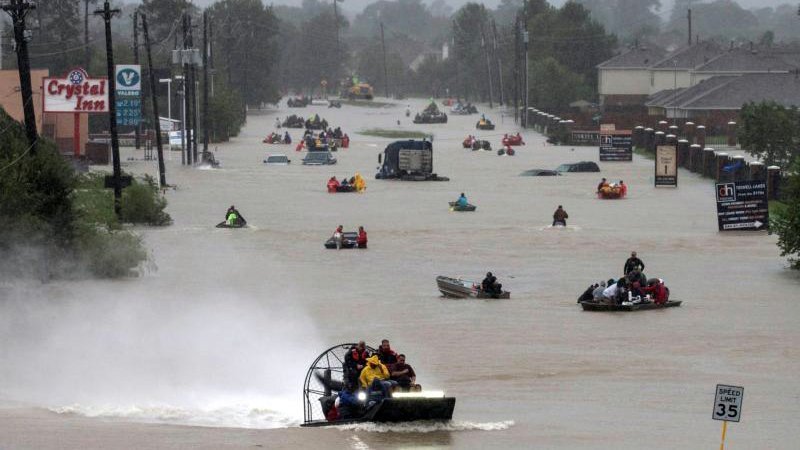 Residents use boats to evacuate people trapped in their homes from floodwaters during Tropical Storm Harvey Aug. 28 in Houston.

WASHINGTON (CNS) — Archbishop Jose H. Gomez of Los Angeles, vice president of the U.S. Conference of Catholic Bishops, asked bishops across the country to consider a special collection to assist victims of Hurricane Harvey along the Gulf Coast.

He suggested in an Aug. 28 letter to bishops that the collection be taken during Masses the weekend of Sept. 2-3 or Sept. 9-10.

“Our hearts and prayers go out to the families that have lost loved ones and to all who have lost homes and businesses along with their sense of normalcy. We also stand with our brother bishops in the region who have the difficult task of providing pastoral care in these most trying times while managing their own losses. Our prayerful and financial support is urgently needed,” he wrote.

Funds collected will support emergency aid and recovery efforts under Catholic Charities USA and pastoral and rebuilding support to the affected dioceses through the bishops’ conference.

The storm has dumped as much as four feet of rain on some areas of Texas and Louisiana, weather observers have reported. Thousands of people have evacuated flooded homes and communities and remained in emergency shelters across the region.

Among the most affected areas are the Diocese of Victoria and the Archdiocese of Galveston-Houston, which Cardinal Daniel N. DiNardo, USCCB president, oversees. Numerous parishes and schools have been flooded while others have offered facilities as shelter. Parishes have also helped distribute food and emergency supplies to storm victims.

“Together with Cardinal DiNardo and the bishops throughout the affected region, I express deep gratitude to the first responders and countless volunteers who are assisting the Gulf Coast region in countless ways,” Archbishop Gomez wrote.