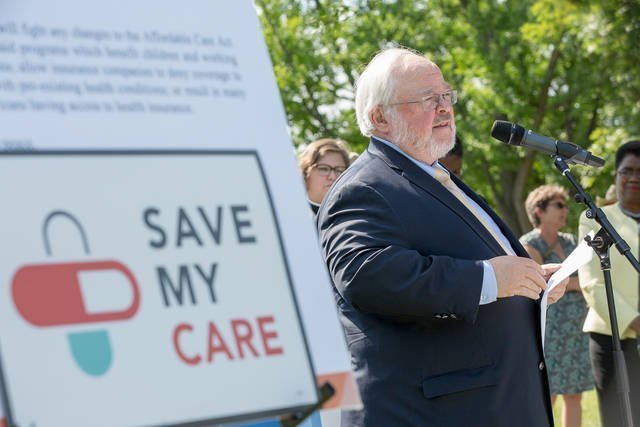 John Carr, director of the Initiative on Catholic Social Thought and Public Life at Georgetown University, speaks during a 23-hour prayer vigil June 29 on Capitol Hill in Washington. The vigil focused on preserving Medicaid and was organized after the Senate delayed a vote on the Better Care Reconciliation Act, its health care reform bill. CNS photo by Jaclyn Lippelmann

As U.S. leaders have spent much of 2017 heatedly debating plans to overhaul the nation’s health-care system, Sister of St. Joseph Christine Wagner has anxiously awaited the outcome.

Sister Wagner serves as executive director of St. Joseph’s Neighborhood Center in Rochester, which provides services for people struggling with health-care-related costs and access. She said her staff has been “preparing as best we can” for a potential influx of new clients, saying repeal measures supported by President Donald Trump would stand to negatively affect 20 million Americans who gained health insurance for the first time under the Patient Protection and Affordable Care Act (ACA) currently in place.

At least for now, all provisions of the ACA still apply following a narrow defeat on July 28 of the U.S. Senate’s Health Care Freedom Act of 2017. The bill would have eliminated several components of the ACA in ways the bill’s critics — including the U.S. Conference of Catholic Bishops — say would negatively impact the poor and vulnerable while easing tax burdens on big businesses and the wealthy.

Although the Health Care Freedom Act has reverted to the Senate calendar but with no action scheduled, the U.S. bishops are calling for other modifications to the ACA in order to better serve the impoverished.

“The task of reforming the health-care system still remains,” Bishop Frank J. Dewane of Venice, Fla., chair of the USCCB Committee on Domestic Justice and Human Development, said in a July 28 statement following the Senate vote.

The ACA — commonly known as Obamacare — was signed into law in 2010 by then-President Barack Obama with the goal of providing affordable health care for all Americans.

Among its key components are: an individual mandate for people to obtain health-care coverage or otherwise face fines; a mandate that all large employers offer health insurance to their employees; a requirement that insurers cover people who have medical conditions that began before their health benefits took effect; an option for young adults to stay on their parents’ insurance plans until age 26; and an expansion of eligibility for Medicaid.

Under the ACA, the rate of uninsured Americans fell from 16 percent in 2010 to 9 percent in 2016, according to the National Center for Health Statistics. However, once Trump took office in January 2017, he urged Congress to fulfill his campaign promise of repealing the ACA in an effort to cut federal spending.

After failing to garner enough votes to pass a larger overhaul of the system, on July 27 the Senate put forth what leaders termed a “skinny” repeal — the Health Care Freedom Act — in hopes of later reaching a compromise with the House of Representatives, which on May 4 had passed the more far-reaching American Health Care Act (H.R. 1628).

But the Senate bill was dealt a 51-49 defeat, with all 48 Democratic senators voting against it along with three Republicans — Senators John McCain of Arizona, Susan Collins of Maine and Lisa Murkowski of Alaska.

The Health Care Freedom Act would have discontinued the individual and employer mandates; expanded health savings accounts; delayed a tax on companies that manufacture medical devices; and denied funding to Planned Parenthood for one year. It also would have continued several aspects of the ACA, such as coverage for those with pre-existing conditions and allowing young adults to remain on parents’ insurance up to age 26.

It did not include cuts to Medicaid, although earlier versions of the bill called for deep reductions to Medicaid funding. Such cuts would have had major significance in New York — which, since the ACA took effect, expanded Medicaid eligibility to include those earning less than 138 percent of the national poverty level. New York is currently second in the country (behind California) for Medicaid spending, having spent nearly $63 billion in 2016, according to the Henry J. Kaiser Family Foundation, a nonprofit organization focusing on national health issues.

According to projections by the nonpartisan Congressional Budget Office, the Health Care Freedom Act would have left an additional 15 million people uninsured next year, and premiums would have risen by 20 percent.

Robyn Carter, director of health-care access at St. Joseph’s Neighborhood Center, said the Health Care Freedom Act would have affected many of her clients — individuals and families who earn too much to qualify for Medicaid or aren’t old enough for Medicare, yet can’t afford expensive insurance premiums.

“The ones that I find more fearful (about ACA repeal possibilities) are the working poor. They’re the ones that seem to be a little more scared — ‘what does this mean, what am I going to have to pay, am I going to even have insurance?’” Carter said. She added that 75 percent of the center’s clients are considered working poor and that the ACA has greatly enhanced their ability to obtain affordable insurance.

“We are dealing with working poor. Many are working two, maybe three part-time jobs,” Opelt said of her agency’s new health-care enrollees. She added that she is concerned over reform actions involving “anything that affects the affordability or availability of coverage.”

In the wake of the Health Care Freedom Act’s defeat, Bishop Dewane is calling for future reform efforts to address such priorities as protecting Medicaid; preserving other means of access for disadvantaged people, including immigrants; improving long-term affordability and market sustainability; ensuring the protection of human life at all stages; and providing conscience protection to individuals and institutions that wish, for moral reasons, to refrain from such practices as providing coverage for abortions or contraceptives.

Sister Wagner pointed out that the ACA “needed to be fixed and tweaked (before repeal efforts), and that still is true.” She said, for example, that deductibles and copays should be brought more in line with what people can afford, noting that even people who have insurance turn to St. Joseph’s Neighborhood Center because they can’t afford the additional costs, particularly for dental and mental-health services.

Emily Tamimie, the center’s administrative assistant for prescription assistance, added that she’d like to see more oversight of the pharmaceutical industry so that unsuspecting patients don’t get blindsided by exorbitant costs.

“I feel like it’s one of those details of health insurance that’s forgotten — ‘here’s your premium, here’s your deductible.’ And lots of time we get calls from people who can’t afford their prescriptions,” Tamimie said.

Will the debate over health care ever culminate in a system that works for all?

Sister Wagner said the only way to move in that direction is through a true bipartisan effort in Washington, where Republican-led repeal efforts have raged ever since the Democrat-driven ACA became law seven years ago. Democrats, in turn, have remained united against repealing or replacing the ACA.

“I don’t see the will of the legislators right now to work for the good of the citizens,” Sister Wagner remarked. “I see the priority as partisanship.”

Bishop Dewane, however, remains optimistic that the political impasse over health care can be erased.

“A moment has opened for Congress, and indeed all Americans, to set aside party and personal political interest and pursue the common good of our nation and its people, especially the most vulnerable,” he said in a statement.