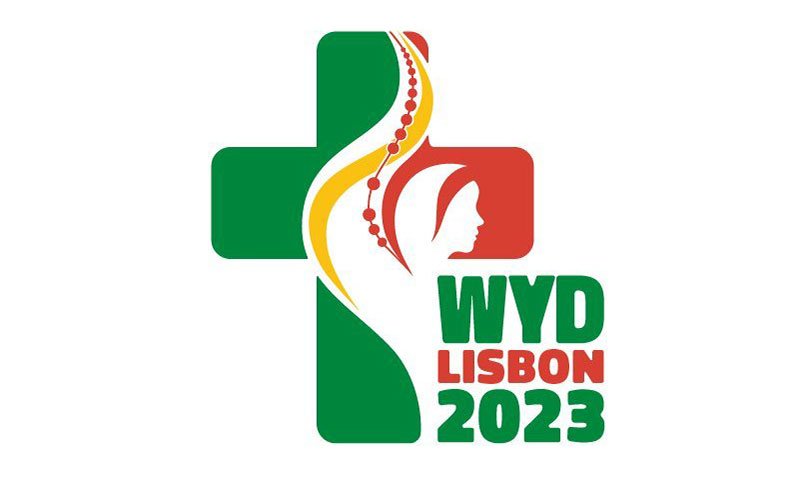 This is the logo for World Youth Day in Lisbon, Portugal, in August 2023. (CNS photo by Holy See Press Office)

Much has changed in the world since the seminal World Youth Day 1993 event in Denver put the event firmly on the map among North American Catholics.

Not the least of those transformations is a post-pandemic world still impacted by changed travel, public health and economic realities.

Nevertheless, the 2023 edition of WYD — set for the first week of August next year in Lisbon, Portugal — is going forward with U.S. registration, opening in the next month or two for World Youth Day pilgrims.

It’s a slightly delayed registration kickoff but one expected to continue accepting registrants into next summer, according to a U.S. bishop’s point person on the event.

At the closing Mass of the last international WYD, in Panama City in January 2019, Pope Francis announced the Portuguese capital would host the next global Catholic gathering of young people.

WYD Lisbon was initially scheduled for August 2022, but the Vatican announced last April that it would be postponed to August 2023 due to the pandemic realities.

That delay means that the next international WYD comes following a four-year stretch — the longest between the global celebrations in the history of the event. This means that for many dioceses and parishes, it will have been seven or 10 years since they have organized a WYD pilgrimage to the more well-attended international WYD celebrations in Brazil (2013) or in Poland (2016).

“That gap is largely due to COVID, as the pandemic caused a one-year delay; preparation for WYD — and likely WYD itself — will be much different in 2023 than it has been for the past four decades of international gatherings,” said Paul Jarzembowski, associate director for the laity in the Secretariat of Laity, Marriage, Family Life and Youth at the U.S. Conference of Catholic Bishops.

Preparations for WYD have been moving forward, but at a much different pace than in past WYD events, he noted, adding there has been much greater caution in the planning and preparatory process this time around.

“There will of course be safety measures taken, but the whole nature of pilgrimage, large gatherings, and what global solidarity means is shifting, especially as climate issues, cultural and racial reckoning, changing economics and intense polarization became amplified in recent years,” Jarzembowski said.

On a practical level, uncertainties of the global pandemic and disruptions in the travel industry meant that domestic preparations for a WYD pilgrimage have been hindered.

There may be less time for what used to be a structured spiritual and practical preparation for parish youth and young adult groups attending the gathering in Lisbon, especially following a year’s postponement, Jarzembowski told Catholic News Service.

His early estimates are that some 15,000 U.S. Catholics will travel to Portugal for WYD, but he expects that head count will change in the coming months as more dioceses and parishes begin formal registration and submit their revised estimates.

The pope announced in June 2019 that the theme of the next WYD would be “Mary arose and went with haste,” a verse taken from St. Luke’s Gospel describing Mary’s visitation to her cousin Elizabeth after the Annunciation.

In light of the coronavirus pandemic, organizers suggested that youngsters could take part in the mission by calling someone who lives alone, speaking to distant family members via the internet, volunteering with local charities or undertaking acts of service in their parishes.

The WYD events held on the European continent have historically been well attended and popular among North American travelers. But the numbers are expected to be lower than past events.

In addition, with a longer period between major WYD events, there has likely been an interruption in the informal word-of-mouth cycle of information sharing about WYD among older youth returning from the events with their younger counterparts and friends.

“I think we are in a reset for WYD and it needs to really discover how it is going to operate in a post pandemic world,” Jarzembowski said.

“The traditional norms for a WYD is that you need a couple years prior for building a group together, for fund raising, for spiritually and practically preparing yourself, a year or two out for building that community leading into the actual event,” he added.

And although Pope Francis has suffered physical ailments, has been seen at recent audiences giving his remarks while in a wheelchair this year and has had a reduced travel schedule, Jarzembowski said he remains hopeful that Pope Francis will not shy away from his commitment to attend the gathering in Portugal.

Normally the pope leads events during the last four days of festival culminating in an overnight vigil and closing Sunday Mass outdoors for hundreds of thousands and sometimes millions of pilgrims.

“One thing that all three popes of WYD have all been keen on is, whether or not he is there in person, the Holy Father’s presence will be there, and we anticipate Pope Francis, God willing, will be present,” Jarzembowski said.

He pointed out that St. John Paul participated in WYD 2002 in Toronto with diminished mobility and toward the end of his pontificate.

“That (Toronto) WYD livened his spirits given the state he was in at the time, and I don’t think Pope Francis would miss this and feel that feeling that WYD brings to the popes,” he said.

Nor will another seasonal uptick in the coronavirus pandemic infection rate or regional travel disruptions likely shut down the 2023 WYD completely. More likely, such a scenario would trigger a series of modifications to the program.

“If anything should happen — barring a major worldwide stoppage of travel — at the worst it would be reduced or minimized in terms of the size and scope but it will happen just at a smaller level,” Jarzembowski predicted, noting that the World Meeting of Families, held in Rome in June 2022, went forward but on a smaller scale.

Lisbon is a popular travel and tourism destination

Several factors in favor of a strong turnout for WYD Lisbon are the general accessibility and popularity of the Iberian peninsula as a travel and tourism destination and the presence of a major Marian devotional shrine situated in Fatima, only two hours away from Lisbon.

The city also is home to the birthplace of the St. Anthony of Padua — born circa 1191 as Fernando de Martins Bulhoes near the Lisbon Cathedral and where a permanent exhibition is kept in his honor.

Portugal also has a plethora of historic monasteries, convents and noteworthy Catholic churches and shrines and is a popular pilgrimage destination in its own right.

Flights to the Iberian Peninsula and the Portuguese capital are among the most affordable for North Americans arriving to Europe. Lisbon jumped to the seventh most tourist-popular destination among Americans this year, according to Allianz Partners, a travel insurance and assistance company.

In addition, the 2023 WYD may draw many last-minute pilgrims from within Europe and the Iberian Peninsula in particular, as was the case in 2011 at WYD Madrid when the numbers on the closing weekend swelled to an estimated 4 million attendees at the Sunday morning Mass with Pope Benedict XVI.

For those worried about the costs of lodging in the Portuguese capital, the WYD registration process can connect pilgrim groups with local options for reduced-cost housing at area churches, schools and in private homes in and around Lisbon.

The target age for the international WYD event is generally 18 to 35, not including chaperones and adult leaders.

Registration information can be found at: https://www.usccb.org/offices/laity-marriage-family-life-youth/world-youth-day-registration-and-visa-information.

Lot of interest and enthusiasm from U.S. bishops, dioceses

Jarzembowski said he has already heard a lot of interest and enthusiasm for the event among U.S. bishops and dioceses. But if the event turns out to be somewhat reduced in size from past international WYD celebrations, that may not be such a bad thing for those who go to Portugal.

“It leaves more opportunities for one-on-one accompaniment and a little more breathing space when we are at WYD — because it can be quite crowded and shoulder to shoulder,” he said. “This might allow people more space to not feel like they are on top of one another,” Jarzembowski said.

“This (will have) been my eighth World Youth Day, and I admit that even I — since it has been awhile — have been kept busy with other projects but I have to get back in the swing of things.

“We have a preparatory visit (to Portugal) in October and I am hoping to get that excitement back,” he said.