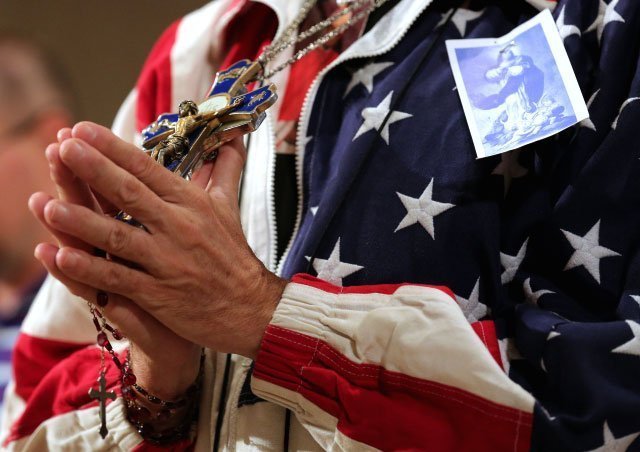 A worshipper holding a rosary and crucifix prays during a Mass celebrated at the Basilica of the National Shrine of the Immaculate Conception in Washington last July 4, the final day of the U.S. bishops’ Fortnight for Freedom campaign for 2014.

Speaking during a May 28 webinar announcing the fourth annual Fortnight for Freedom, Archbishop Lori called on Catholics to learn about the importance of religious liberty throughout the history of the United States and to actively promote free religious practice during the two-week period beginning June 21.

"Religious freedom is not something that stands alone. It’s not simply a legal question for the church. It pertains very much to the new evangelization," Archbishop Lori explained.

This year’s fortnight observance theme is the "Freedom to Bear Witness," stemming from the Gospel message that Jesus came to the world to bear witness to the truth, explained Hillary Byrnes, assistant general counsel for the USCCB, who joined the archbishop during the webinar.

She said dozens of local events in dioceses across the country are planned, including prayer services, discussions and charitable works.

"We would definitely encourage people to attend those events as well as read and educate yourself on religious freedom," Byrnes told the nationwide audience of diocesan employees and parish leaders.

"We’re looking this year to raise awareness of religious freedom so people don’t take it for granted," she added.

Archbishop Lori said government policies, such as the federal mandate to include a full range of contraceptives in employee health insurance and the redefinition of marriage throughout the country, pose growing threats to religious freedom.

The fortnight, he said, also is meant to draw attention to the dangers to religious liberty around the world as Christians and people of other faith traditions face persecution, limits on their freedom and death.

"Pope Francis pointed out that we are truly living in an age of martyrs," the archbishop said. "I think we have to pay a lot of attention to the sacrifices which people are making for their faith around the world. Many Christians are being persecuted, beheaded. And Muslims are being persecuted for not being Muslim enough.

"These are men and women of deep faith and deep courage, and as we witness their sacrifice, first of all I think we have to hold up and to highlight what’s happening to them. I’m not sure our leadership is paying enough attention to their sacrifice."

Information about the fortnight and various resources to help plan local observances are available online at www.Fortnight4Freedom.com.