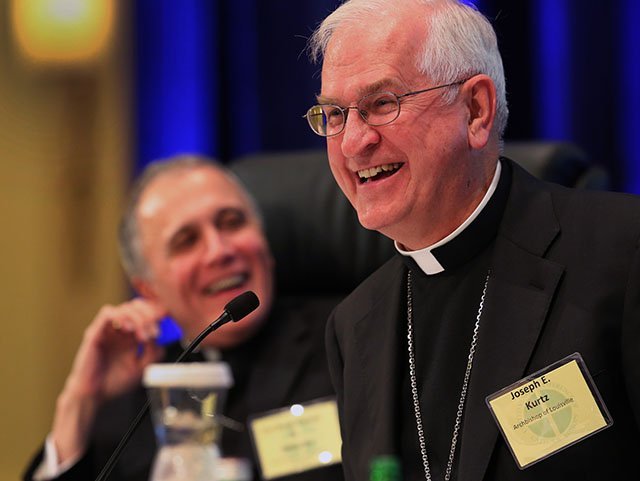 BALTIMORE (CNS) — Though there were no actions on the U.S. bishops’ agenda in Baltimore dealing with immigration, poverty and other public policy issues, the president of their conference said Nov. 11 that he hopes to meet with President Barack Obama and the leaders of the House and Senate soon on several topics.

In a brief comment during the fall general assembly of the U.S. Conference of Catholic Bishops, Archbishop Joseph E. Kurtz of Louisville, Kentucky, said he had heard from many bishops about those issues and hopes to supplement the work that committees and USCCB staff are doing on such issues by conferring with the politicians.

He told Catholic News Service that he intends to pursue a meeting with the president and the congressional leaders as soon as December.

The Catholic Church runs a vast network of anti-poverty programs and has long advocated for laws and policies that support the poor. An attempt by the USCCB at its 2012 meeting to approve a new policy statement on poverty, "The Hope of the Gospel in Difficult Times: A Pastoral Message on Work, Poverty and the Economy" did not gain the two-thirds vote required to pass. There has not publicly been an effort to resurrect such a statement.

The USCCB’s work on immigration reform has been of a somewhat higher profile. For instance, in September the bishops’ migration committee and the Catholic Legal Immigration Network wrote to key staffers at the White House and the Department of Homeland Security urging various actions to assist immigrants. Among suggestions were the type of executive actions Obama has said he would enact before the end of the year.

At the meeting, Archbishop Kurtz said a meeting with Obama and House and Senate leaders would bolster the work being done by committees and reinforce that the "highest levels" of the USCCB back those efforts.

The same afternoon, in another unscheduled intervention, Seattle Auxiliary Bishop Eusebio L. Elizondo, chairman of the migration committee observed, that the USCCB has been active in seeking immigration reform for decades and will continue to do so.

He said the Catholic bishops do this not for political reasons but because they are "guided by the human tragedies we see every day in our parishes and programs."

Bishop Elizondo said the bishops "would be derelict not to support administrative actions" that could give relief to suffering families and protect them from possible separation because of deportation.

"The American people want their elected officials to fix this," he said, adding that the bishops are "ready to help facilitate that process … and to keep the dialogue going." This especially important, he said, because the majority control of Congress has shifted to the Republican party, where there are more members who may be inclined to block efforts at immigration reform.

New York Cardinal Timothy M. Dolan, Archbishop Kurtz’s predecessor as USCCB president, met with Obama at least once for a similar meeting, according to the USCCB.