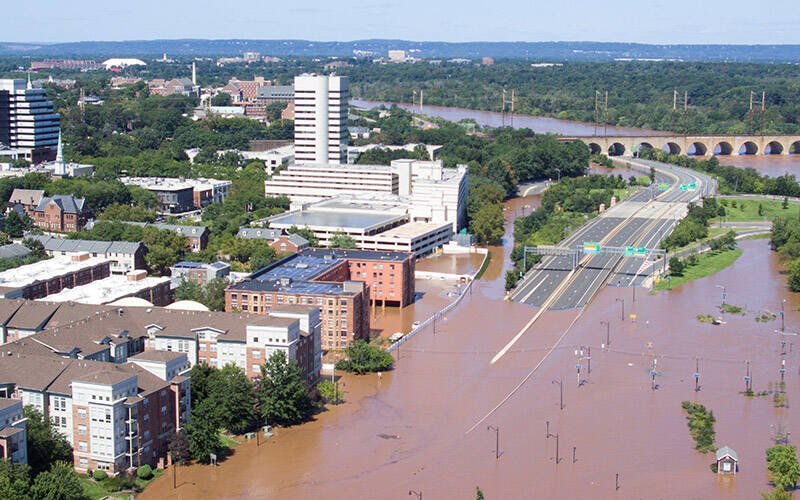 Roads are covered in floodwaters caused by the remnants of Tropical Storm Ida in New Brunswick, N.J., Sept. 2, 2021, which brought drenching rain, flash floods and tornadoes to parts of the Northeast. (CNS photo by Drone Base/Reuters)

WASHINGTON (CNS) — The president of the U.S. Conference of Catholic Bishops is asking bishops throughout the country to consider taking up a voluntary special collection to help in the recovery and the humanitarian response to Hurricane Ida.

Los Angeles Archbishop José H. Gomez said in a Sept. 8 letter to bishops that the funds collected would be distributed through the Bishops Emergency Disaster Fund to areas most impacted by the storm.

In his letter, the archbishop said funds would be used to support the pastoral and reconstruction needs of the Catholic Church in affected areas and also aid the response by Catholic Charities USA and possibly Catholic Relief Services.

“Funds will be used in response to the hurricane and the impact of subsequent flooding and tornadoes and any other disasters that occur and will be distributed where they are most needed,” the letter said.

“However, if such purpose(s) become unnecessary, impractical, or impossible to fill, USCCB may use such contributions for other emergency disaster relief where it is most needed as determined by the Committee on National Collections using its emergency response protocol,” the letter added.

Archbishop Gomez also wrote that he recognized that the continuing COVID-19 pandemic has imposed financial challenges on parishes and dioceses, but stressed that there is a growing need in communities impacted by the storm. He expressed hope that people would respond in such a time of need.

Ida made landfall in Louisiana Aug. 29 as one of the most powerful storms to strike the state. It caused extensive damage in the Gulf Coast region, knocking out power, destroying homes, buildings and churches, and causing extensive flooding.

The storm continued toward the Northeast, where it dropped heavy rains in New Jersey, New York, Pennsylvania and Connecticut, leading to massive flooding of homes, subways and streets. Through Sept. 7, Ida had claimed 89 lives in the U.S. Another 20 people died in Venezuela before Ida headed northward.