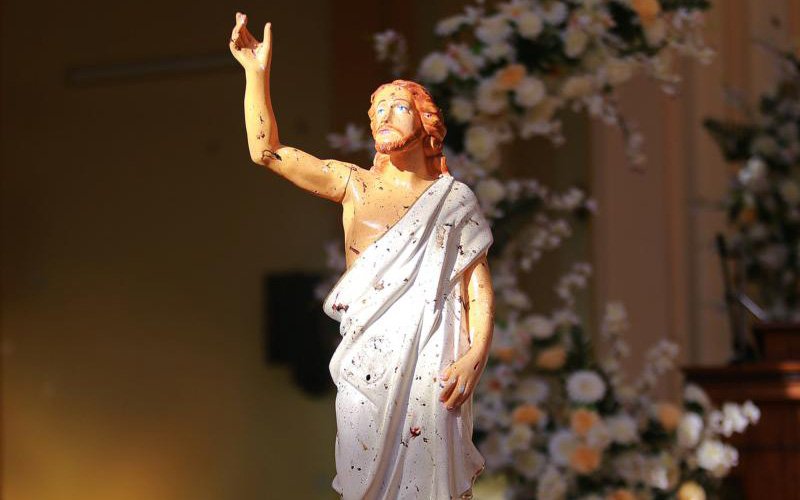 A blood-stained statue of Christ is seen after a bombing at St. Sebastian Church in Negombo, Sri Lanka, April 21, 2019. At least 200 people were killed and hundreds more injured on Easter Sunday in Sri Lanka when attackers unleashed an apparently coordinated series of bombings that simultaneously targeted Christian churches and luxury hotels. (CNS photo by Reuters)

The president of the U.S. Conference of Catholic Bishops termed as “a great evil” the Easter terrorist attacks in Sri Lanka targeting the country’s minority Christian community as worshippers packed three churches.

Sri Lankan government officials April 22 blamed the little-known Islamic group National Thowheeth Jama’ath for the bombings, which also were directed at three luxury hotels. Islamic State later claimed responsibility, but the claim could not be confirmed immediately. The multiple bombings left more than 300 people dead and over 500 injured.

“This great evil targeted these churches as they were packed full of worshippers who were celebrating Easter, the day in which Christians around the world celebrate the rising of the King of Peace from the dead,” said Cardinal Daniel N. Dinardo of Galveston-Houston in a statement April 21.

He said the churches were St. Sebastian’s Catholic Church in Negombo, St. Anthony’s Catholic Shrine in Colombo, the nation’s capital, and Zion Church in the eastern city of Batticaloa, which is an evangelical church. The hotels that were attacked were the Shangri-La, Kingsbury and Cinnamon Grand, all in Colombo.

“We offer our prayers for the victims and their families. And we join with all people of goodwill in condemning these acts of terrorism,” Cardinal DiNardo said. “This evil cannot overcome the hope found in our Savior’s resurrection. May the God of hope who has raised his Son, fill all hearts with the desire for peace.”

The majority of those killed and injured are believed to be Sri Lankan nationals, many of whom were attending church services. The government said those killed included at least 39 foreign nationals from the United States, United Kingdom, India, China, Japan, Australia, Turkey, Australia and other European countries.

At the Vatican, after his Easter blessing, Pope Francis expressed his sadness by over the bombings in Sri Lanka.

“With profound sorrow, we offer our prayers to the Christian community of Sri Lanka, and all those devastated by today’s horrific acts of violence,” he said.

“In solidarity with the survivors and their loved ones, we grieve the dead and pray for God to heal the wounded, comfort the mourners, and instill ever more deeply in all peoples a commitment to peace, which our creator fervently desires for all his children,” Cardinal Cupich added.

Los Angeles Archbishop Jose H. Gomez, who is vice president of the USCCB, said he hoped the dead would know “the promise of the Resurrection. … May God bring comfort to their families and their loved ones.”

“Only love can conquer evil and violence, so we ask Jesus this morning for the courage to love and we pray for the conversion of every heart that is hardened by hatred,” the archbishop added. “May the Blessed Virgin Mary, who is our mother and the mother of mercy, console those who are suffering and watch over all of us. And may God grant us peace.”

“Just when they were hearing the Easter message of peace, violence yet again forced itself onto the global stage,” said Cardinal Joseph W. Tobin of Newark, New Jersey, about churchgoers targeted by the terrorist group.

“We, in the Archdiocese of Newark, join our prayers with people of goodwill throughout the world, who have expressed solidarity with the victims of these attacks and in our condemnation of senseless violence manifested today,” he added. “Despite these attacks, may we continue to proclaim the truth of the Easter Gospels — the hope of new life is offered to all. We pray that truth be shown in Sri Lanka in these difficult days.”

The University of Notre Dame in South Bend, Indiana, announced that a Mass would be celebrated in remembrance of the victims of terrorist attacks in Sri Lanka the evening of April 24 at the Basilica of the Sacred Heart.

“Violence against religious minorities has a long history in Sri Lanka,” said Jim Winkler, president and general secretary of the National Council of Churches. “We pray these attacks will not result in a renewed cycle of violence and we express our hope that intensified interreligious engagement and cooperation may result from these attacks.”

He noted that in the past six months, “three Abrahamic faiths” have suffered violence, with the attacks on the Pittsburgh synagogue, the New Zealand mosques and now these churches in Sri Lanka.

“In spite of these terrible crimes, Christ’s resurrection, celebrated across the world, gives us the comfort of knowing that light penetrates the darkness, love prevails against hate, and life defeats the power of death,” Winkler said in an April 22 statement.

Terrorist attacks like those in Sri Lanka “are the acts of those who reject the sanctity of life, human rights and religious freedom,” Carl Anderson, CEO of the Knights of Columbus, said in a statement April 22. In addition to prayers, he said, the fraternal organization is sending $100,000 to Cardinal Malcolm Ranjith of Colombo to use “in the rebuilding and repair of his Christian community in the aftermath of this act of terrorism.”

Anderson said that “globally, it is well documented that Christians are the most persecuted religious group today. Now is the time for every country to take concrete steps to protect their minority populations, including Christians, and to stop this persecution and slaughter.”