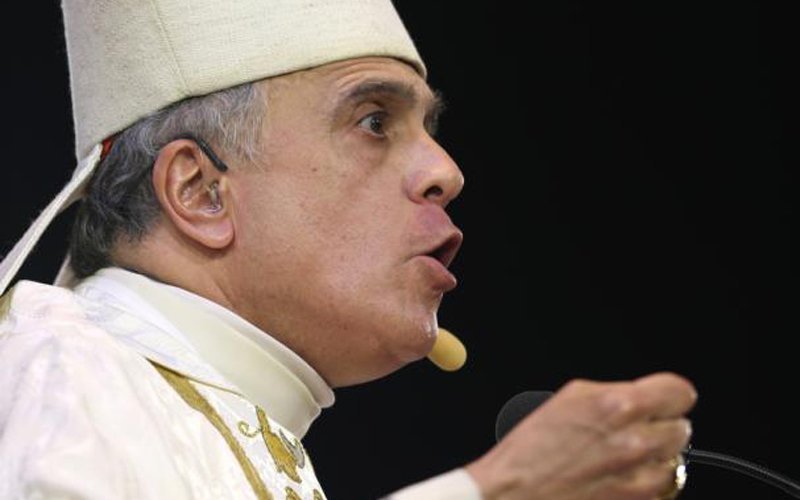 Cardinal Daniel N. DiNardo of Galveston-Houston, president of the U.S. Conference of Catholic Bishops, concelebrates the closing Mass at the 2017 Convocation of Catholic Leaders in Orlando, Fla. Cardinal DiNardo said in an Aug. 27 state that he was "eager for an audience" with Pope Francis to gain his support for the bishops' plan to respond to the clergy sexual abuse crisis. (CNS photo by Bob Roller)

WASHINGTON (CNS) — The president of the U.S. Conference of Catholic Bishops said he was “eager for an audience” with Pope Francis to gain his support for the bishops’ plan to respond to the clergy sexual abuse crisis.

In an Aug. 27 statement, Cardinal Daniel N. DiNardo of Galveston-Houston also said that the questions raised by Archbishop Carlo Maria Vigano, former nuncio to the United States, in a letter published by two Catholic media outlets “deserve answers that are conclusive and based on evidence.”

“Without those answers, innocent men may be tainted by false accusations and the guilty may be left to repeat the sins of the past,” the cardinal said.

Archbishop Vigano, who served as nuncio to the United States from 2011 to 2016, wrote that he was compelled to write his knowledge of Archbishop McCarrick’s misdeeds because “corruption has reached the very top of the church’s hierarchy.”

In his statement, Cardinal DiNardo reiterated an Aug. 16 call for an apostolic visitation, working with a national lay commission granted independent authority, to investigate the “many questions surround Archbishop McCarrick.”

He also said he convened members of the USCCB Executive Committee Aug. 26 and that they “reaffirmed the call for a prompt and thorough examination into how the grave moral failings of a brother bishop could have been olerated for so long and proven no impediment to his advancement.”

The plan earlier outlined by Cardinal DiNardo also called for detailed proposals to make reporting of abuse and misconduct by bishops easier and improve procedures for resolving complaints against bishops.

Cardinal DiNardo again apologized to abuse survivors and their families. “You are no longer alone,” he said.

The statement explained how since 2002, professionally trained staff have worked with the U.S. church to support survivors and prevent future abuse. He pointed to the steps the church has put in place in response to abuse including the zero-tolerance policy regarding clergy abuse: safe environment training in diocesan offices, parishes and schools, background checks for church workers and volunteers working around children, victim assistance coordinators, prompt reporting to civil authorities and diocesan lay review boards.

“In other ways, we have failed you. This is especially true for adults being sexually harassed by those in positions of power, and for any abuse or harassment perpetuated by a bishop,” Cardinal DiNardo said.

“We will do better. The more she is buffeted by storms, the more I am reminded that the church’s firm foundation is Jesus Christ. The failures of men cannot diminish the light of the Gospel.”