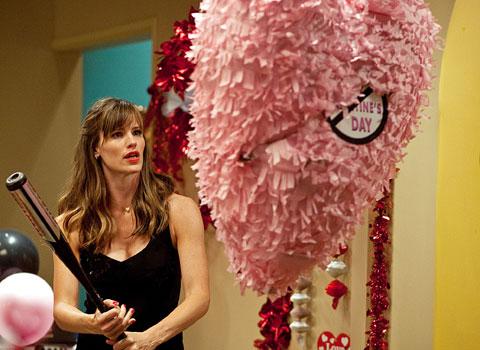 NEW YORK (CNS) — Director Garry Marshall’s ensemble romantic comedy "Valentine’s Day" (New Line) — though chockablock with talented stars — is as unengaging as it is unwieldy. Worse, as penned by Katherine Fugate, this tale of loves lost and found, while rejecting marital infidelity, otherwise takes the full physical expression of affection as a given, before marriage, before college and between members of the same gender.

The script charts the amorous ups and downs of a series of interconnected Los Angelenos over the titular holiday, beginning with the early-morning proposal of starry-eyed florist Reed (Ashton Kutcher) to his work-obsessed girlfriend Morley (Jessica Alba). Since the pair already lives together, Reed only has to go around the foot of the bed to pop the question.

Reed’s best friend is elementary school teacher Julia (Jennifer Garner), who wakes up beside her newfound beau, cardiologist Harrison (Patrick Dempsey). He’s off on a trip to San Francisco that will prevent him from taking Julia to dinner on the most sentimentally significant night of the year, so we immediately sense there’s something wrong, even if Julia doesn’t.

Edison (Bryce Robinson), one of Julia’s fifth-graders, lives with his grandparents Estelle and Edgar (Shirley MacLaine and Hector Elizondo), who are preparing to renew their vows after more than 50 years of marriage. But former screen ingenue Estelle has a long pent-up secret that could derail their return to the altar.

Other plotlines involve Jamie Foxx as a sportswriter, Eric Dane as pro football player with a clouded future, Queen Latifah as the athlete’s no-nonsense agent, and Anne Hathaway as a secretary at the agent’s office who moonlights as a sex phone worker. And that’s not to mention Julia Roberts as a furloughed army Captain.

While, as the Bard assures us, "The course of true love never did run smooth," here, neither does the course of shacking up, talking dirty for extra pay or bedding down — as Hathaway’s character also does — with someone you’ve been dating for all of two weeks.

The film contains implicit approval of nonmarital sexual activity and homosexual acts, partial nudity, adultery and phone-sex themes, sexual references and jokes, brief irreverent humor and a half-dozen crude and some crass terms. The USCCB Office for Film & Broadcasting classification is O — morally offensive. The Motion Picture Association of America rating is PG-13 — parents strongly cautioned. Some material may be inappropriate for children under 13.