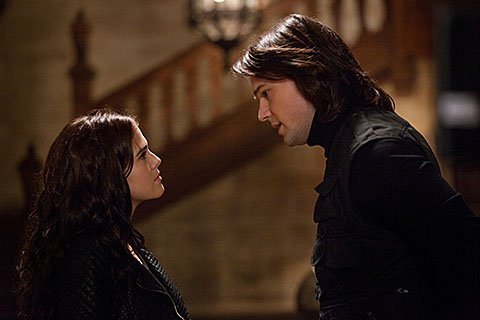 Zoey Deutch and Danila Kozlovsky star in a scene from the movie "Vampire Academy." The Catholic News Service classification is A-III -- adults. The Motion Picture Association of America rating is PG-13 -- parents strongly cautioned. Some material may be inappropriate for children under 13.

NEW YORK (CNS) — Add half a cup of "Twilight" to a teaspoon or two of "Harry Potter" and, voila, you’ve got the pallid fantasy adventure "Vampire Academy" (Weinstein).

Though intended to please an adolescent palate, this unappealing recipe includes both visual and thematic ingredients that make it inappropriate fare for targeted teens.

Adult moviegoers, on the other hand, will likely be more bored than offended. That’s because director Mark Waters’ adaptation of a series of books by novelist Richelle Mead relies far too heavily on a complex, self-referential mythology about which it’s very hard to care. Doing her best to guide the audience through it all, during the exposition-heavy opening scenes, is plucky teen Rose Hathaway (Zoey Deutch).

Rose, it seems, is a Dhampir, a half-vampire, half-human hybrid. Dhampirs have but one purpose in life: to protect the Moroi, a race of benign, but mortal bloodsuckers. Happily for Rose, the particular object of her care is Moroi princess Lissa Dragomir (Lucy Fry), who also happens to be Rose’s BFF. How awesome is that?

And who is it that threatens the Moroi? Why the Strigoi, of course. These nightmarish vein-drainers are not only evil, they’re immortal, at least until someone drives a silver stake into their hearts.

All together now, with feeling: Strigoi live forever, but not so the Moroi.

Taking a back seat to all this explanation is the plot, which kicks off with Rose and Lissa on the lam. They’ve escaped from the titular school for reasons that will only be fully revealed quite a while later. But their yearlong adventure in the real world is about to come to an end as uber-Dhampir Dimitri Belikov (Danila Kozlovsky) supervises their recapture.

So it’s back to the old alma mater where, under the benign gaze of Headmistress Kirova (Olga Kurylenko) and Provost Victor Dashkov (Gabriel Byrne), Lissa resumes her royal studies and guardian-in-training Rose gets some remedial martial arts lessons from Dimitri.

Not only are the Strigoi lurking about outside, however; there also seem to be threats to Lissa’s welfare from within the supposedly safe confines of the academy.

Still, there’s always time for love, right? In Lissa’s case, she just can’t keep her eyes off bad-boy social outcast Christian Ozera (Dominic Sherwood). Christian is shunned among the Moroi because his parent chose to become Strigoi. As for Rose, it’s all about much older, but still dreamy Dimitri.

One characteristic of the good undead is that they regularly attend a version of church. In fact, Vampire Academy is only a nickname; the institution’s formal designation is St. Vladimir’s Academy, though the Vladimir in question, hero of Moroi and Dhampir alike, bears no resemblance to any real-life champion of faith.

Still, Lissa, Rose and their peers regularly interrupt their high-school style backstabbing to troop off to the chapel, a sanctuary that combines Western art and architecture with a de-Christianized take on Eastern Orthodox vestments.

Such religious trappings hardly mask the fact that fang-sinking as a metaphor for sex is never far from the surface in screenwriter — and director’s brother — Daniel Waters’ script. This becomes especially problematic early on while Rose and Lissa are on the run. With no other source of nourishment available, Lissa feeds on Rose’s blood, and the effect, for her willing victim, is more than merely painful.

As for more conventional fleshly bonding, it’s kept under wraps with a single exception, and that occurs when both characters involved have been bewitched. In fact, the students of St. Vladimir’s seem to take a refreshingly dim view of premarital high jinks, which they refer to by the old-fashioned F-word: fornication.

For all the sublimation that may be going on, however, there is still, unmistakably, quite a bit of steam being let off.

The film contains much hand-to-hand combat as well as action violence with minimal gore, semi-graphic nonmarital sexual activity, numerous sexual references and considerable crass language. The Catholic News Service classification is A-III — adults. The Motion Picture Association of America rating is PG-13 — parents strongly cautioned. Some material may be inappropriate for children under 13.