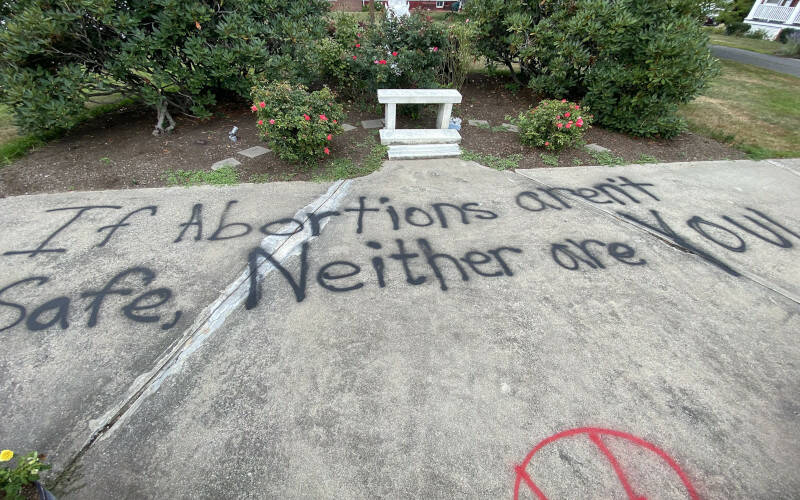 Vandalism is seen near Bethlehem House, a pregnancy center in Easthampton, Mass., Aug. 18. Vandals spray-painted “Jane’s Revenge” on benches located outside the building and the message, “If abortion isn’t safe, neither are you.” (CNS photo by Carolee McGrath)

Police said vandals early Aug. 18 spray-painted “Jane’s Revenge” on benches located outside of Bethlehem House in Easthampton, near Springfield, along with the message, “If abortion isn’t safe, neither are you.”

Jane’s Revenge is an organization that supports keeping abortion legal. It has claimed responsibility for similar actions at churches and pro-life pregnancy centers across the country since May, when a draft opinion of the U.S. Supreme Court decision in the Dobbs vs. Jackson Women’s Health Organization case was leaked.

The court’s June 24 decision in the Dobbs case ultimately overturned Roe v. Wade, which had legalized abortion nationwide. The ruling allows states to decide their own laws regarding abortion.

Director is concerned for clients; vandals strike other centers

“I’m nervous because the clients are coming here today. We have to give diapers out in the parking lot,” said Pam Hibbard, Bethlehem House director.

“We are not doing this for the money. We do it from the heart,” Hibbard told iObserve, the online news outlet of the Springfield Diocese.

In July, vandals also targeted two pregnancy care centers in Worcester, Massachusetts: Clearway Clinic and Problem Pregnancy. Clearway’s windows were smashed and the words “Jane’s Revenge” were spray-painted in black on the sidewalk outside of the building.

Bishop is saddened by vandalism that is meant ‘to intimidate’

“The messages spray-painted on the outside of the building appear to have one purpose and that is to intimidate the good people who depend on the assistance provided there, along with those who volunteer at Bethlehem House, whose sole purpose is to help women and their families facing a crisis pregnancy,” Bishop Byrne said in a statement.

“No matter where you stand on the issue of abortion, I pray all people of goodwill will join me in condemning this act and all acts of vandalism and violence against any group,” he said. “We are a people of life called to lead with love. That’s what we will continue to do. Please join me in praying for all affected by this incident.”

Father Daniel Pacholec, director of pro-life activities for the Springfield Diocese, echoed the bishop, saying “it should be greatly disturbing to all people of goodwill that an organization that assists women and families is the target of such violence against women.”

“Jane’s Revenge and any organization associated with it should be held criminally liable,” he said.

Some call for legislative crackdown on pregnancy centers

Bethlehem House has been in the spotlight recently, as the Easthampton City Council has been considering a proposed ordinance titled “Deceptive Advertising Practices of Limited Services Pregnancy Centers.”

A pregnancy center would be in violation and subject to a $300 fine if it advertised in such a way deemed “deceptive, whether by statement or omission, and that a limited services pregnancy center knows or reasonably should know to be deceptive.”

People have spoken at recent council meetings in favor of and against the ordinance. Bethlehem House is the only pregnancy care center that operates in Easthampton, which prompted many in the pro-life community to be concerned about the intent of the ordinance and if, in fact, it would ultimately impact the center’s work.

Owen Zaret, councilor at-large, who cosponsored the ordinance, has said Bethlehem House would not be affected by the ordinance and called their work “laudable.”

Zaret decried the vandalism Aug. 18, saying it “has no place in our community or country.

“This is an act of extremism and terrorism. We settle disagreements through conversation, not through violence,” Zaret said.

Since the Supreme Court’s decision nationwide there have been calls to crack down legislatively on pregnancy care centers that some believe deceive women. In July, Massachusetts Attorney General Maura Healey issued a statement claiming pregnancy centers use “deceptive and coercive tactics.”

A warning about pregnancy care centers is listed on Healey’s mass.gov website. There is no mention of the vandalism that took place in Worcester or in Easthampton.