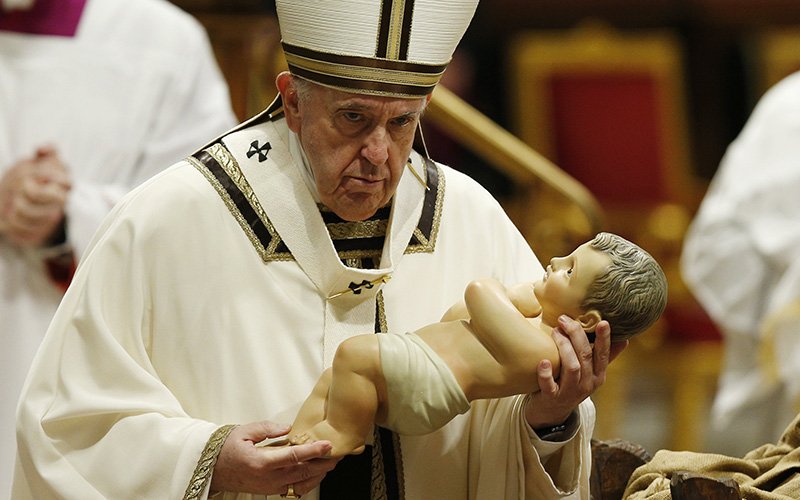 Pope Francis carries a figurine of the baby Jesus at the conclusion of Christmas Eve Mass in St. Peter's Basilica at the Vatican in this Dec. 24, 2021, file photo. (CNS photo by Paul Haring)

VATICAN CITY (CNS) — With most of the restrictions of the COVID-19 pandemic removed, Pope Francis is scheduled to return to a full slate of public liturgies in December and January.

Pope Francis is scheduled to resume joining the public to pay homage to Mary under the title of the Immaculate Conception on her feast, Dec. 8. At 4 p.m. he will join the traditional gathering at the Spanish Steps in the center of Rome.

Even though the public event was canceled in 2020 and 2021 because of the pandemic, the pope still went to the statue of the Immaculate Conception during the early morning to lay a basket of flowers there.

Papal schedule for December and January

Also on the papal schedule in December and January:

— At 6 p.m. Dec. 12, Pope Francis will celebrate Mass in St. Peter’s Basilica for the feast of Our Lady of Guadalupe.

— On Dec. 24 at 7:30 p.m., the pope will celebrate the Mass of the Nativity of the Lord. While the Mass is commonly referred to as “midnight Mass,” the Vatican celebration gradually has been moved earlier to make it easier for people to attend.

— At noon Dec. 25, the pope will give his traditional Christmas blessing “urbi et orbi” (to the city and the world) from the loggia of St. Peter’s Basilica.

— At 5 p.m. Dec. 31, he will preside over an evening prayer service in St. Peter’s Basilica for the feast of Mary, Mother of God. Vespers will be followed by eucharistic adoration, benediction and the singing of the “Te Deum” to thank God for the year that is ending.

— At 9:30 a.m. Jan. 8, the feast of the Baptism of the Lord, he will celebrate Mass in the Sistine Chapel and will baptize infants.

Tickets can be requested online at the Vatican website (vatican.va) through the Prefecture of the Papal Household.

Tags: Feast Days & Saints, Pope Francis
Copyright © 2023 Catholic News Service, Inc. All rights reserved. Linking is encouraged, but republishing or redistributing, including by framing or similar means, without the publisher's prior written permission is prohibited.