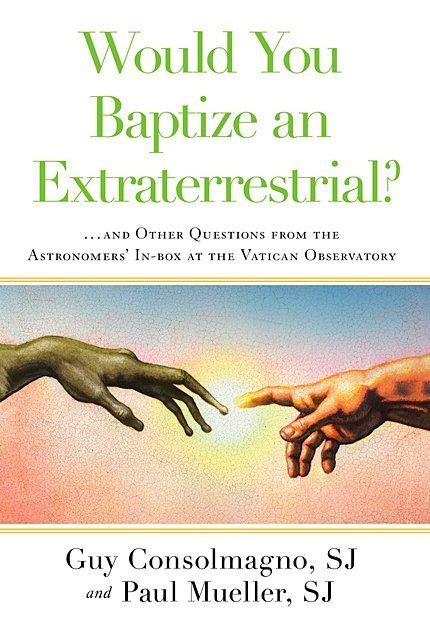 This is the cover of "Would You Baptize an Extraterrestrial? ... and Other Questions From the Astronomers' Inbox at the Vatican Observatory" by Jesuit Brother Guy Consolmagno and Jesuit Father Paul Mueller.

Would You Baptize an Extraterrestrial? … and Other Questions From the Astronomers’ Inbox at the Vatican Observatory by Jesuit Brother Guy Consolmagno and Jesuit Father Paul Mueller. Image (New York, 2014). 293 pp., $25.

As members of the research staff at the Vatican Observatory, Jesuit Brother Guy Consolmagno and Jesuit Father Paul Mueller are asked a lot of questions related to science and faith.

But a select number are asked repeatedly: What was the star of Bethlehem, how did the universe begin and how will it end, what really happened to prompt Galileo Galilei’s entanglement with the church, and another particularly quirky one inspiring the title of the book — "Would you baptize an extraterrestrial?"

Written in dialogue form as a nod to the famous astronomer Galileo, the book is a conversation between Brother Consolmagno, the scientist and researcher, and Father Mueller, the historian of science and philosopher. The 12-point questions help frame an overall larger discussion about the relationship between religion and science. Within the answers to each question, Brother Consolmagno and Father Mueller show the reader that science and religion must continue to have "conversations" to help satisfy the human desire to problem-solve and discover how the universe works.

Scientific data, Brother Consolmagno notes, is like the Bible in that they are both a collection of information and events. As science progresses, old data (unless flawed) is not discarded, it is categorized and saved for further interpretation. And, Brother Consolmagno explains, the Bible can be viewed as a collection of "humankind’s encounters with God" and "not the theory of how to interpret those events." The Bible’s data, like scientific data, "continues to inform us."

Information is viewed through a cultural lens and within the context of what is known at that time, they note. And, Father Mueller points out, to try "to prove or disprove religious beliefs on the basis of currently accepted scientific theories, because those theories will likely change someday" is not logical. That’s just the way of scientific progress, and the authors show how what was accepted as a scientific norm yesterday was replaced time and again as new data was interpreted.

Brother Consolmagno and Father Mueller warn readers to be open-minded to the relationship between religion and science, and to understand that science itself can be "God engaging with us in the best kind of game." Using the beauty of a star as an example, he says, "Every new observation is a window into how the Creator acts."

Both authors have esteemed academic careers.

Brother Consolmagno is a Detroit-native planetary scientist whose job at the Vatican Observatory includes research about meteorites, asteroids and small solar system bodies. In his role as a member of the International Astronomical Union, Brother Consolmagno was part of a committee of astronomers who deliberated the change of Pluto from a planet to a dwarf.

Cincinnati-native Father Mueller has degrees in physics, history, philosophy and theology and a doctorate in the history and philosophy of science. Needless to say, all these degrees lead to an excellent discussion and timeline of the political turmoil and wartime loyalties underlying the ultimate house arrest of Galileo by cardinal inquisitors.

Thankfully for the common reader, Father Mueller takes on the role of comedian and student, asking Brother Consolmagno to further hash out and explain the complexities of the movements of planets, classical physics and expansion theory. The brother and the priest take their banter to 12 locations to set the scene of their conversations and to adequately answer the questions in the book.

The discussions can get deep, vague and complex, but the rich, tangible analogies used from the settings help clarify significantly, as well as entertain greatly. Brother Consolmagno and Father Mueller enjoy Italian cuisine while watching the universe end, because, why not enjoy one last good meal?

Oh, and about that extraterrestrial? As Brother Consolmagno once replied to a group of eager journalists looking for something to print, he retells us in the book that, speaking purely on unofficial terms, "Only if she asks!"

Lordan has master’s degrees in education and political science and is a former assistant international editor of Catholic News Service.