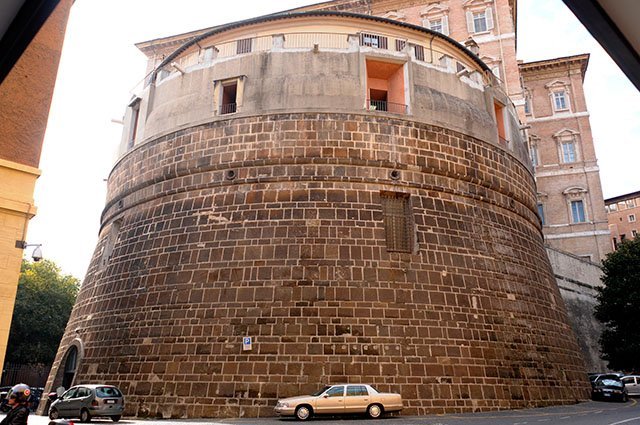 The Institute for the Works of Religion, popularly known as the Vatican bank, is seen in a 2009 photo. Amid widespread speculation about a complete and quick reorganization of Vatican departments and rumors in the Italian media that Pope Francis was going to close the Vatican back, a top Vatican official told everyone to calm down.

VATICAN CITY (CNS) — The Vatican City prosecutor has opened an investigation into possible embezzlement by two former top officials at the Institute for the Works of Religion, more commonly called the Vatican bank.

Jesuit Father Federico Lombardi, Vatican spokesman, said Dec. 7 that the prosecutor, Gian Piero Milano, opened the investigation of the two former bank officials "on a hypothesis of embezzlement for real estate operations in the period 2001-2008." An investigation of possible collusion by their legal adviser in the real estate deals also is underway.

The possible embezzlement was reported to Milano by current bank officials who discovered irregularities during the Vatican bank’s internal verification of accounts and operations over the past year, Father Lombardi said.

The spokesman said the Vatican bank accounts of those involved have been frozen.

Angelo Caloia, the former bank president, and Lelio Scaletti, the former director general, are being investigated in connection with the sale of 29 Vatican-owned buildings in Rome and Milan, according to the Reuters news agency.

The news agency, which said it had obtained Milano’s order freezing the accounts, said Milano suspects Caloia and Scaletti of entering in the Vatican books prices below what actually was received in the sales and of pocketing the difference, perhaps as much as 57 million euros (over $70 million).

Gabriele Liuzzo, the lawyer under investigation for collusion, confirmed to Reuters that his account had been frozen, but he said the suspicions were "rubbish" and insisted all the money from the property sales had gone to the bank. Neither Caloia nor Scaletti responded to Reuters’ request for comment.

A statement dated Dec. 6 and posted on the Vatican bank’s website confirmed officials there "pressed charges against two former managers and a lawyer some months ago, underlining its commitment to transparency and zero tolerance, including with regard to matters that relate to a more distant past."

"We are very pleased that the Vatican authorities are taking decisive action," said Jean Baptiste de Franssu, president of the bank’s board of supervisors.