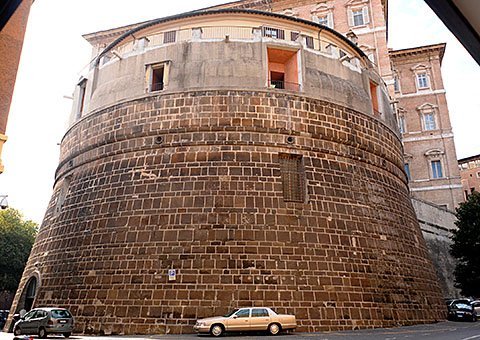 The Institute for the Works of Religion, popularly known as the Vatican bank, is seen in a 2009 photo.

VATICAN CITY (CNS) — Preparing for big changes in its governance and structure, the Institute for the Works of Religion, commonly known as the Vatican bank, published its 2013 financial statement, reporting a nose dive in net profit.

In a press release published July 8, the institute — also known by its Italian acronym IOR — said the dramatic reduction in net profits was due to "extraordinary expenses; losses related to propriety investments in externally managed investment funds committed to in 2012 and early 2013; and the fluctuation in the value of the IOR’s gold reserves."

Income from interest, commissions and dividends from securities all increased in 2013, but the bank said the value of its gold reserves fell by 11.5 million euros and it had to write down the value of some investments by 28.5 million.

The institute also took a 14.4 million-euro hit when it donated securities "with a book value of 15.1 million euros" to "a foundation of the Holy See." The press release did not provide further information, but it was widely thought to be referring to an arrangement to invest in an Italian religious film production company authorized by retired Cardinal Tarcisio Bertone when he was still president of the cardinals’ commission overseeing the bank.

Speaking to reporters on the papal flight back from the Holy Land in late May, Pope Francis said the matter was being studied.

The Institute for the Works of Religion also uses some of its assets to support the work of the Roman Curia. In 2013, the press release said, the bank contributed 54 million euros to the Holy See.

The statement also quoted Australian Cardinal George Pell, the new Vatican prefect for the economy, as thanking the bank’s current president and board of supervisors for their work in verifying all the institute’s accounts, closing many of them, and implementing stricter procedures.

"After all their hard work, we are now in a position to move the IOR to a second phase of reform under new leadership," Cardinal Pell was quoted as saying.

A successor to Ernst von Freyberg, a German industrialist named president of the bank by Pope Benedict XVI in 2013, and new board members were expected to be announced by Cardinal Pell July 9 at a news conference. The current board of supervisors includes Carl Anderson, supreme knight of the Knights of Columbus.

From May 2013 to June 2014, the institute conducted a systematic screening of all customers to ensure it had complete information on all of them and to guarantee they fit the bank’s intended client profile by being a Catholic institution, member of the clergy, employee or retired employee of the Vatican or an embassy or diplomat accredited to the Holy See.

As of June 30, the statement said, about 3,000 accounts had been closed; the vast majority — 2,600 — were described as small, dormant accounts. However, 396 accounts that did not meet the stricter client profile also were closed; they had combined balances of 44 million euros. Another 359 accounts, with a combined balance of 183 million euros, "are earmarked for closure and are currently subject to the relevant closing process."