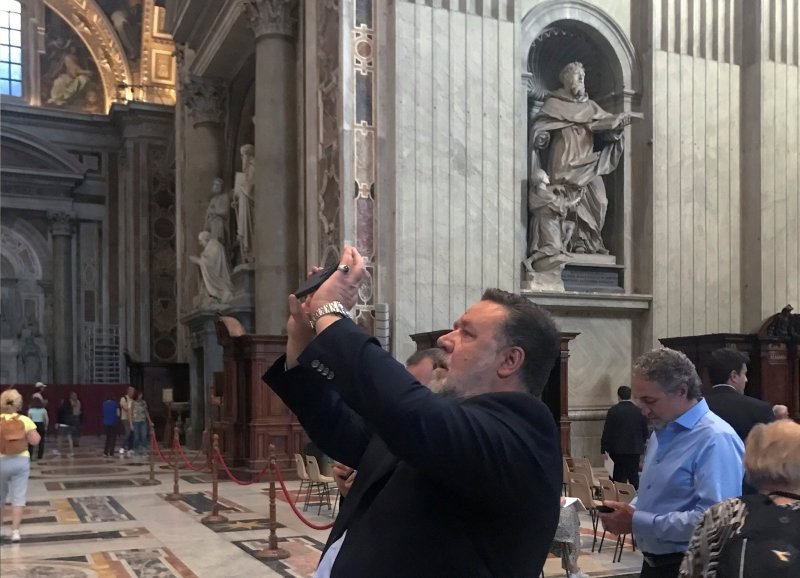 Actor Russell Crowe uses his smartphone inside St. Peter's Basilica after attending a special screening in the Vatican of the new film "The Greatest Beer Run Ever" Oct. 17, 2022. The Vatican treated new recruits of its police force and Swiss Guard to beer and popcorn at the screening, topped off by a meeting with Crowe, who stars in the film. (CNS photo/Phil Pullella, Reuters)

Mother Teresa film seeks to put saint back in spotlight

VATICAN CITY (CNS) — As soon as the lights dimmed for the start of the show in the tiny Vatican movie theater, the crack of beer cans being opened joined the quieter crunch of popcorn.

After all, when there is a private showing of “The Greatest Beer Run Ever,” starring Zac Efron and a green duffel bag full of Pabst Blue Ribbon beer, organizers made sure an impromptu concession stand in the theater was stocked with the Italian counterpart, “Nastro Azzurro,” mineral water and small buckets of popcorn.

Moviegoers also were treated to a visit and photo opportunities with the film’s co-star, Russell Crowe, who was in Rome for a festival promoting another one of his films and who was honored by the city of Rome Oct. 14 as “Rome’s ambassador in the world,” two decades after his Oscar-winning performance in “Gladiator.”

Based on a true story, the “The Greatest Beer Run Ever” follows the adventures of John “Chickie” Donohue. Played by Efron, the young Irish Catholic Marine veteran sneaks into war-torn Vietnam to deliver beer to his friends to show them their small Manhattan neighborhood was still supporting them despite the quickly deteriorating public support for the war. A neighborhood mother also asks him to bring a set of rosary beads to her son — who is one of Donohue’s best friends.

It’s a story of “faith and friendship during the war,” said Oblate Father Andrew Small, who has a brief cameo in the film as the neighborhood’s parish priest.

The event Oct. 17 was organized by the Pontifical Commission for the Protection of Minors, which Father Small serves as secretary. The commission invited members of the papal Swiss Guard and the Vatican gendarme corps to attend the screening of the film, which was released by Apple Studios in September.

Among those attending were 16 new recruits of the gendarme police force who were the first group of gendarme recruits to receive safeguarding training provided by the commission.

Father Small told Catholic News Service Oct. 19, “Those serving on the front lines, in whatever way, are strongly motivated by a desire to protect others. What keeps them going if not the bonds of friendship and memories of loved ones who care for them. From the commission, we feel a special bond with those who protect us in whatever way and faith can only make those bonds more resilient.”

While guests were watching the film’s first showing, Father Small and Andrew Muscato, one of the film’s producers, visited Pope Francis, who lives in the Vatican guest house across the street from the Vatican movie theater, to bless a bag full of rosaries for guests.

The rosaries and the green duffel bag — emblazoned with the name, “Doc Fiddler’s,” the local bar Donohue and friends frequented — were replicas of those that appeared in the film.