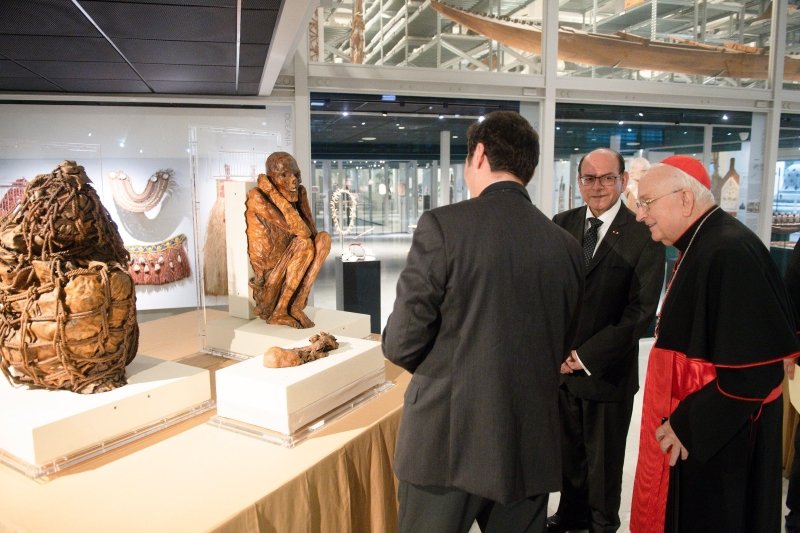 Peruvian Foreign Minister César Landa Arroyo, center, and Cardinal Fernando Vérgez Alzaga, president of the Pontifical Commission for Vatican City State, look at the mummies that will be repatriated to Peru. The two signed a formal agreement for the repatriation of the mummies on October 17, 2022 at the Vatican Museums. (CNS photo/courtesy Vatican Museums)

VATICAN CITY (CNS) — Completing a project to repatriate human remains held in the Vatican Museums’ ethnological collection, the Vatican and the government of Peru signed an agreement Oct. 17 to return to Peru three mummies sent to the Vatican in 1925.

Cardinal Fernando Vérgez Alzaga, president of the Pontifical Commission for Vatican City State, and César Landa Arroyo, foreign minister of Peru, signed an agreement Oct. 17 in the Vatican Museums for the return of the mummies.

The three human remains are thought to be several centuries old, but their exact age will not be known until after thorough studies are conducted in Peru. They were found at an altitude of more than 9,800 feet in the Peruvian Andes along the Ucayali River. The mummies are assumed to be Incan.

The mummies were part of the Vatican Museums’ Anima Mundi ethnological collection, which features thousands of pieces of Indigenous art and artifacts from around the world. The mummies, like many of the pieces of art and cultural artifacts from the peoples of Australia and Oceania, the Americas, Africa and Asia, were sent to the Vatican for the 1925 Holy Year opened by Pope Pius XI. The celebration included a major exposition on Catholic missionary activity around the world.

With a conviction that human remains are not works of art or collectibles, in 2010 the Vatican Museums began a project to return human remains in its collection to their countries of origin. The first remains, a mummy from Ecuador, were returned in 2014. Three years later, the museums returned to Ecuador a tsantsa, a specially treated head used in ceremonies. At the time, the museums said the three Peruvian mummies were the only human remains still in the collection.

The Vatican is in talks with a number of Indigenous communities around the world, particularly in Canada, about the repatriation of some of their art and artifacts, although until now most of the Vatican’s efforts have been to work with Indigenous representatives and scholars to get a greater understanding of the objects in its collection in order to present and describe them more accurately.

Landa, the Peruvian foreign minister, told reporters the repatriation of the mummies could help other communities repatriate objects, but the mummies are clearly in a different category.

“More than objects, they are human beings. They are human remains that should be buried or be valued with dignity where they come from, which is precisely from the Andes of Peru,” he told Rome Reports and COPE, the radio network of the Spanish bishops’ conference.