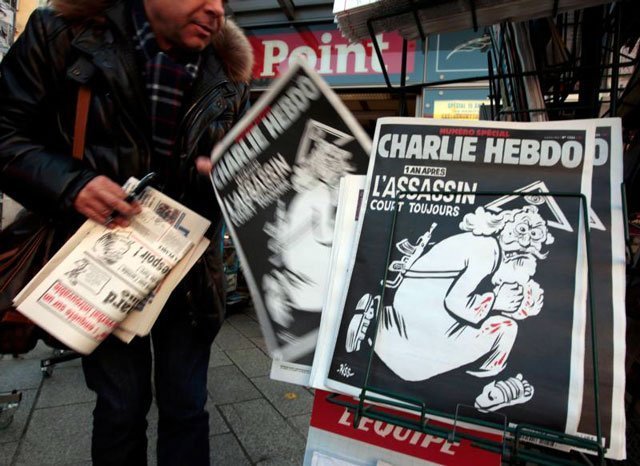 A man takes a copy of the latest edition of French weekly magazine Charlie Hebdo with the headline "One year on: the assassin is still out there," displayed Dec. 6 at a kiosk in Nice, France. Marking the one-year anniversary of when two Islamic extremists raided the magazine's offices and killed 12 people, the magazine featured a drawing of an angry God running with blood spattered on him and a machine gun slung over his back.

VATICAN CITY (CNS) — A world that carefully adheres to the dictates of being "politically correct" yet refuses to respect people’s faith in God is a "sad paradox," the Vatican newspaper said.

The Jan. 6 article, headlined "The Charlie Hebdo question: Manipulated faith," came in response to the front cover of the latest issue of the French satirical magazine Charlie Hebdo.

Marking the one-year anniversary of when two Islamic extremists raided the magazine’s offices and killed 12 people, the magazine featured a drawing of an angry God running with blood spattered on him and a machine gun slung over his back. The headline read: "One year on: the assassin is still out there."

The article in the Vatican newspaper, L’Osservatore Romano, said the satirical dig was nothing new "because behind the misleading banner of uncompromising secularism, the French weekly is forgetting once again what religious leaders of every faith have been repeating for a long time in rejecting violence in the name of religion — that using God to justify hatred is true blasphemy, as Pope Francis has reiterated several times."

In the latest cover design for Charlie Hebdo, the article said, "one observes the sad paradox of a world that is ever more careful about being ‘politically correct’ almost to the point of being ridiculous … but that does not want to recognize and respect every believer’s faith in God," regardless of what religion it be.

The Vatican newspaper article quoted Anouar Kbibech, president of the French council of the Muslim faith, saying the drawing "harms all believers of different religions. It is a caricature that is unhelpful at a time when we need to come together side by side." The French Conference of Catholic Bishops questioned whether this "sort of controversy was the kind of thing France needed," according to the article.

The deadly attack Jan. 7, 2015, perpetrated by two brothers with reported ties to a branch of al-Qaida, was said to be in retaliation to the publication of cartoons mocking Islam’s prophet Muhammad. The killings sparked much debate about the role of satire and just how far freedom of speech should go.

Pope Francis clarified his position during an inflight interview with reporters Jan. 19 when he said, "In theory, we all agree: There is freedom of expression, a violent aggression is not good, it’s always bad. We all agree, but in practice, let us stop a little because we are human and we risk provoking others. For this reason freedom must be accompanied by prudence."

"I cannot constantly insult, provoke a person continuously, because I risk making him angry, and I risk receiving an unjust reaction, one that is not just. But that’s human. For this reason I say that freedom of expression must take into account the human reality and for this reason it must be prudent. It’s a way of saying that one must be well-behaved, prudent. Prudence is the human virtue that regulates our relationships. I can go so far, I cannot go further, and there, beyond that, no," he said.