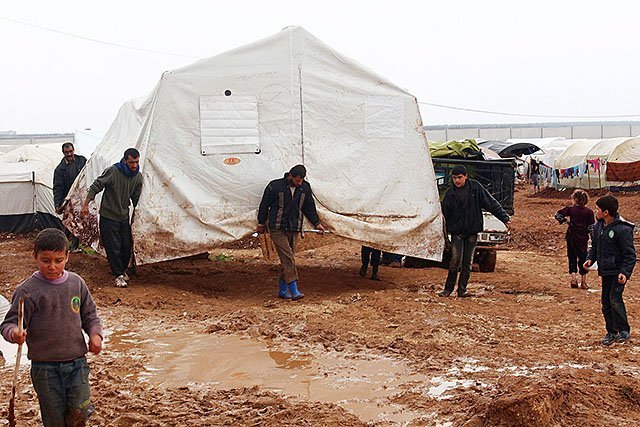 Syrian refugees move a tent at the Bab Al-Salam refugee camp in Azaz, near the Syrian-Turkish border Jan. 17. Syria's nearly three-year civil war has led to what the U.N. calls the "greatest humanitarian crisis in modern history."

VATICAN CITY (CNS) — International leaders and representatives of various Syrian factions now engaged in peace talks must give "priority to negotiations over guns (and) to people over inordinate power," said the Vatican’s observer at the talks.

"Dialogue is the only way forward," said Archbishop Silvano Tomasi, Vatican representative to U.N. agencies in Geneva, in a speech to the U.N.-sponsored Geneva II peace talks Jan. 22.

"Confronted with the indescribable suffering of the Syrian people, a sense of solidarity and common responsibility prompts us to engage in a dialogue which is based on honesty, mutual trust, and concrete steps," he said.

The United Nations has reported that "well over 100,000 people have been killed and nearly 9 million others driven from their homes" since 2011 when efforts began to oust President Bashar Assad.

Even as representatives from 40 countries, regional organizations, the Syrian government and the Syrian opposition began the peace conference in Montreux, Switzerland, Jan. 22, a rocket hit a Catholic charities office in Aleppo, Syria.

Nobody was hurt in the attack, but the office of Caritas Aleppo was badly damaged, according to Caritas Internationalis, the Vatican-based umbrella organization for Catholic charities around the world.

Father Toni Ghazzi, a parish priest and Caritas board member, "was on his way to open the center at 4 p.m. when the attack happened. He was with some children," a Caritas statement said. "The rocket skidded in front of them. All were thrown to the ground. The explosive then ricocheted into the Caritas center, destroying the Office for Rent Assistance. The missile ended in the waiting room for people Caritas helps. Fortunately, it failed to explode."

The "violence has to stop because too much suffering has been inflicted on all the people of Syria and on the entire region," Archbishop Tomasi said at the peace talks.

"The time has come to take concrete steps to implement the good intentions expressed by all parties to the current conflict," he said.

The archbishop made the following proposals:

— "An immediate cease-fire without preconditions" and the immediate halt of arms shipments and weapons funding to all parties.

— Increased humanitarian aid, because "millions have been displaced and are in life-threatening situations."

— The promotion of dialogue and reconciliation talks by Syria’s religious communities.

— Support for dialogue from regional and international powers, so that Syria might be a "catalyst of peace in other parts of the region."

Archbishop Tomasi also called for guarantees that all Syrian citizens be treated equally before the law and within society, and said that cultural, ethnic or religious differences should be seen as enriching Syrian society rather than causing tension or conflict.