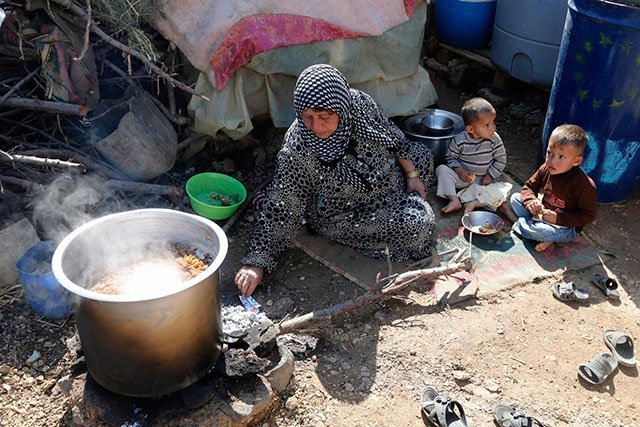 Syrian refugees rest while cooking a meal at an informal settlement in Bekaa, Lebanon, Oct. 16. Msgr. Giampietro Dal Toso, secretary of the Pontifical Council Cor Unum, who just returned from a visit to Syria said "the humanitarian situation is worse than I thought."

BEIRUT, Lebanon (CNS) — A Vatican official who just returned from a visit to Syria said "the humanitarian situation is worse than I thought."

Msgr. Giampietro Dal Toso, secretary of the Pontifical Council Cor Unum, told U.S. journalists in Beirut Nov. 1 that he had seen "the concrete face of suffering" as a result of war.

He also said the humanitarian crisis in Iraq is tied to the crisis in Syria.

"We should begin to look at this crisis as one crisis," he said. "We have people crossing borders," so humanitarian agencies must look at the bigger picture, he said. His remarks echoed those of Christian aid officials who work in the region.

Msgr. Dal Toso, the second-highest official at Cor Unum, which coordinates Vatican charitable agencies, said Syria’s middle class has disappeared, but noted, "The whole population is a victim of this war."

Syria, which had a population of 22 million people before violence began in 2011, has at least 10 million people who are refugees or who are displaced within their own country, according to U.N statistics. The effect of such a shift in demographics has driven up the cost of living, including rent, medicine and even school fees, Msgr. Dal Toso said.

Other countries also are feeling the strain of accepting refugees from Syria and Iraq. For instance Lebanon, a country about 70 percent of the size of Connecticut, has a population of 4 million people, with an additional 1.5 million refugees living within its borders. The refugees are considered guests in Lebanon; they pay rent and work for lower wages than Lebanese. Catholic aid officials working in Lebanon say the government is, in essence, subsidizing the refugees’ garbage collection and utilities, such as electricity, because in many cases the refugees tap into existing utilities.

Msgr. Dal Toso, said "the first priority is to stop the violence," then negotiate a solution and deal with the humanitarian situation.

The Vatican official, who met with Syrian bishops in Damascus Oct. 28 and 29, said the Catholic Church in Syria was helping the whole population without regard to religion. This is an important way to illustrate that Christ is a bridge among peoples and "opens the heart of everyone," he added.

He cited the work of priests and nuns and partner agencies such as Catholic Relief Services, the U.S. bishops’ international relief and development agency. The Pontifical Mission and Jesuit Refugee Service are among other agencies working in Syria and with refugees in neighboring countries.

"For me, the church is a very big player … it is well-accepted," he said. He also emphasized that "this is not a religious war" but a political war with consequences for all people.

Msgr. Dal Toso said "people did not feel alone," but felt like part of the larger church body. He said Pope Francis’ initiatives had been well received. The pope convened a day of prayer for Syria in September 2013. In early October he met with the region’s nuncios, and on Oct. 20 he briefed the world’s cardinals on the situation during a general consistory.

He said Syrians were making small contributions — $5 to $100 — to help their neighbors. "Even in these little contributions they say, ‘I’m there’" to help.

However, even though "life in Damascus is apparently very ‘normal,’" he said, using his hands to make quotation marks for emphasis on normal, "people are feeling this insecurity. They are trying to decide whether to remain in Syria or leave."