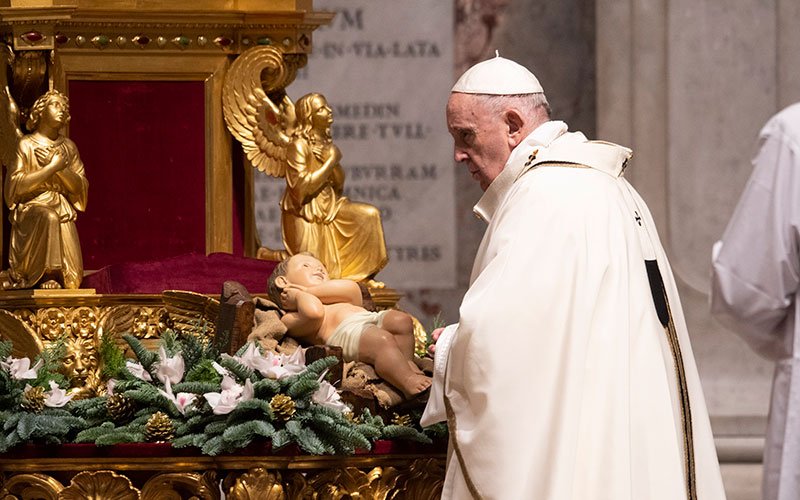 Pope Francis celebrates Christmas Eve Mass in St. Peter's Basilica at the Vatican in this Dec. 24, 2020, file photo. The pope will celebrate Christmas Eve Mass at 7:30 p.m. as he did in 2020 with precautions against COVID-19 still in place. (CNS photo by Cristian Gennari/pool)

The Vatican still checks people’s temperatures as they enter St. Peter’s Basilica, requires everyone to wear masks and has arranged seating to keep distance between people.

The Vatican Dec. 13 published the list of Pope Francis’ liturgies for the Christmas season.

The schedule begins with what many people refer to as “midnight Mass” although the Mass has not been celebrated at midnight at the Vatican since 2009 when Pope Benedict XVI moved it to 10 p.m. Pope Francis moved it to 9:30 p.m. in 2013, his first Christmas as pope, and to 7:30 p.m. in 2020 to allow people to return home before the curfew that was in effect.

Also on the pope’s calendar:

— At noon Dec. 25, he will give his traditional Christmas blessing “urbi et orbi” (to the city and the world).

— At 5 p.m. Dec. 31, Pope Francis will preside over an evening prayer service for the feast of Mary, Mother of God. Vespers will be followed by eucharistic adoration, benediction and the singing of the “Te Deum” to thank God for the year that is ending.

Although not mentioned in the notice published Dec. 13, the website of the Office of Papal Liturgical Ceremonies also lists a 9:30 a.m. Mass and baptism of infants in the Sistine Chapel Jan. 9, the feast of the Baptism of the Lord.