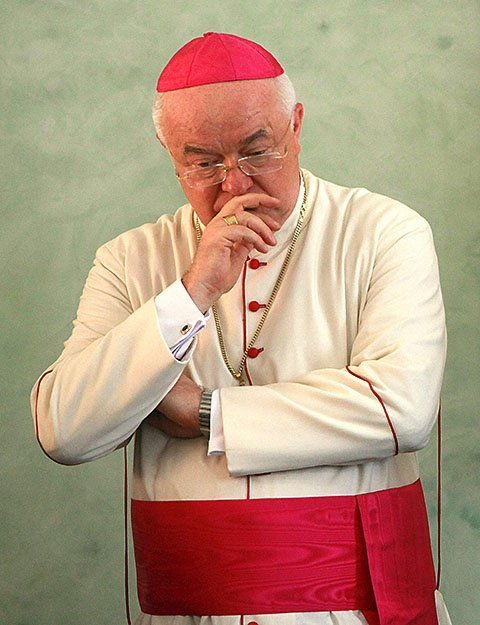 Jozef Wesolowski, former nuncio to the Dominican Republic, is pictured during a 2011 ceremony in Santo Domingo. The Vatican has placed the former archbishop under house arrest as he awaits a criminal trial for sexually abusing young boys.

VATICAN CITY (CNS) — The Vatican has placed a laicized papal ambassador under house arrest as he awaits a criminal trial for sexually abusing young boys.

Jesuit Father Federico Lombardi, the Vatican spokesman, released a statement Sept. 23 regarding the case of former Archbishop Jozef Wesolowski, a Pole who served as nuncio to the Dominican Republic until August 2013.

The Vatican announced in June that a canonical court had investigated Wesolowski on charges of sex abuse in the Dominican Republic and concluded by dismissing him from the clerical state, depriving him of all rights and duties associated with being a priest except the obligation of celibacy. Wesolowski would face a criminal trial under the laws of Vatican City State, the Vatican said at the time.

On Sept. 23, Father Lombardi said, a Vatican prosecutor summoned Wesolowski and informed him of the charges against him.

Because of the "gravity of the accusations," investigators decided to arrest the former ambassador, the spokesman said, but "in light of the medical condition of the accused, supported by medical documentation," he was placed under house arrest in Vatican City.

Father Lombardi said Vatican authorities had acted in accordance with the "will expressed by the pope, that such a grave and delicate case might be addressed without delay, with the just and necessary rigor, with the full assumption of responsibility by the institutions of the Holy See."

In August, the Vatican denied covering up for Wesolowski by bringing him back to Rome last year and suggested he might also have to stand trial on the charges in the Dominican Republic.