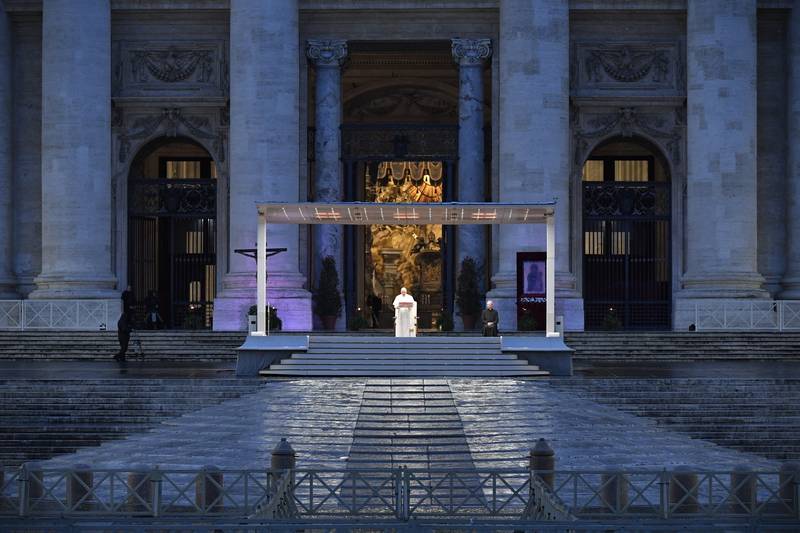 Pope Francis leads a prayer service in an empty St. Peter’s Square at the Vatican in this March 27, 2020, file photo. The Vatican has published a book commemorating the prayer service, which made a strong impression on people around the world in the same month COVID-19 was declared a global pandemic. (CNS photo by Vatican Media)

VATICAN CITY (CNS) — One year ago, Pope Francis stood in a rain-drenched, empty St. Peter’s Square praying for God’s comfort as the world began experiencing the growing severity of the COVID-19 pandemic.

The Vatican is commemorating that event with a book of texts and images “encapsulating the meaning of that extraordinary moment of prayer,” the Dicastery for Communication said in a March 24 press release.

The English version of the book titled, “Why are You Afraid? Have You No Faith?” is jointly published by the Vatican publishing house and Our Sunday Visitor.

The book includes Pope Francis’ recent reflections about that evening and what was going through his mind.

He said he thought about “the empty square, people united at a distance,” and about the sculpture in the square of a boat carrying migrants, which made him think how “we are all on the boat.”

“The whole drama is in front of the boat: the plague, the loneliness, in silence,” and he thought about how “everything was united: the people, the boat and everyone’s suffering,” he said.

Even though the square was completely empty of people due to the nationwide shelter-in-place order, he said, Jesus and Mary were present, which he wanted symbolized by displaying the “Miraculous Crucifix” from Rome’s Church of St. Marcellus and the icon of “Salus Populi Romani” (health of the Roman people) from the Basilica of St. Mary Major.

And, he said, “I was in contact with the people. There was no moment I was alone.”

When asked what gave him strength and hope during the intense moments of the hourlong prayer and blessing, the pope said, “Kissing the feet of the crucified Christ always gives me hope.”

“He knows what it means to walk, and he knows all about quarantine because they put two nails there to keep him there,” he said.

“Jesus’ feet are a compass for people’s lives, when to walk and when to stand still. The Lord’s feet are very touching for me,” the pope said.