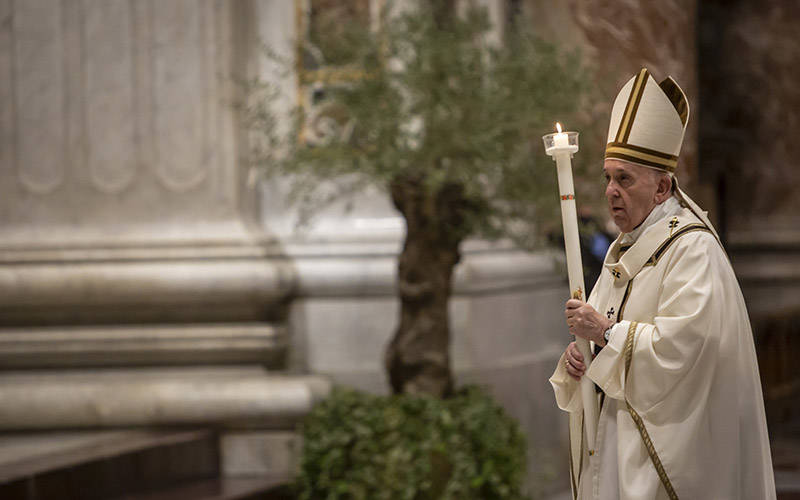 Pope Francis carries a candle as he celebrates the Easter Vigil in St. Peter's Basilica at the Vatican in this April 11, 2020, file photo. Due to the COVID-19 pandemic, Holy Week and Easter services at the Vatican will again this year not be open to the general public. (CNS photo by Stefano Dal Pozzolo/pool)

The Vatican published Pope Francis’ calendar for Holy Week and Easter, which due to coronavirus restrictions, will be celebrated primarily in St. Peter’s Basilica with a very small congregation.

Before the COVID-19 pandemic, the pope had made it a tradition to celebrate the Mass and foot-washing ritual at a prison or detention center, refugee center or rehabilitation facility.

The Vatican did not give a reason for the pope’s absence, which — if he does not celebrate the liturgy elsewhere — would mark the first time he does not preside over the Mass of the Lord’s Supper.

The Vatican also announced that the pope asked two troops of Italian scouts from Rome and Umbria to prepare the meditations for the Way of the Cross. Youngsters from two group homes for disadvantaged young people in Rome — “Mater Divini Amoris” and “Tetto Casal Fattoria” — have drawn the illustrations to accompany the prayer.

The young people’s “words and colors convey the complexity of a world made up of small and large crosses, but also of trust and hope for the future,” the Vatican said.

Here is the schedule of papal liturgical ceremonies for Holy Week according to Vatican News (times listed are local):