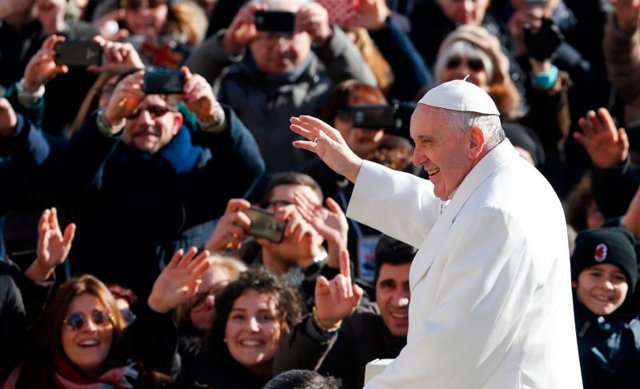 Pope Francis is seen at St. Peter's Square at the Vatican Feb. 6.

The pope’s schedule includes a penitential celebration and a consistory for several causes of canonization. However, the schedule does not say where he will celebrate the Holy Thursday Mass of the Lord’s Supper.

Greg Burke, vice director of the Vatican press office, told journalists the location will be announced at a later date. Since the start of his pontificate, the pope has celebrated the Holy Thursday Mass in places that highlight a pastoral need.

Last year, the pope celebrated the Mass and foot-washing ritual at Rome’s Rebibbia prison where he washed the feet of 12 male and female inmates.

The Vatican issued a decree Jan. 21 specifying that the Holy Thursday foot-washing ritual can include "all members of the people of God," including women — a practice observed for some time by Pope Francis and many priests around the world.

The calendar released by the Vatican Feb. 29 included:

— March 6-11: Lenten retreat with officials from the Roman Curia in Ariccia, a town outside Rome.

— March 27: Easter morning Mass in St. Peter’s Square, followed by the papal blessing "urbi et orbi" (to the city and the world).

— April 2: Jubilee Prayer Vigil in St. Peter’s Square for those devoted to the spirituality of Divine Mercy.