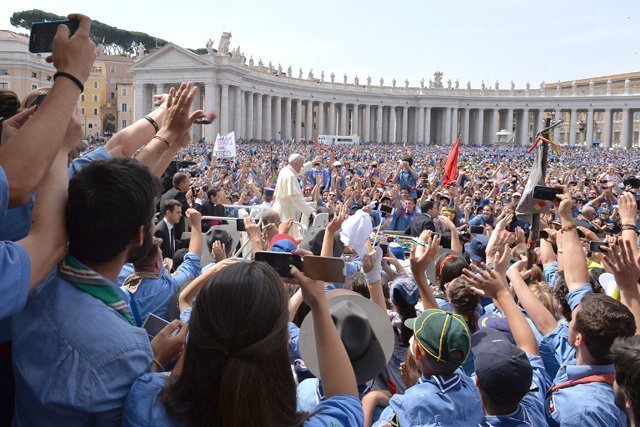 A large crowd greets Pope Francis as he arrives for an audience in mid-June in St. Peter's Square at the Vatican. More than 3.2 million pilgrims visited and attended papal events, liturgies or prayer services at the Vatican in 2015, the Vatican said.

VATICAN CITY (CNS) — More than 3.9 million pilgrims visited and attended papal events, liturgies or prayer services during the Holy Year of Mercy in 2016, the Vatican said.

The Prefecture of the Papal Household, the Vatican office that coordinates the audiences and distributes the free tickets to papal audiences and liturgies, said a total of 3,952,140 people attended a papal event at the Vatican. The Vatican released the statistics Dec. 29.

Although the total was slightly higher from the 3.2 million visitors received by Pope Francis in 2015, for a jubilee year it still fell short of the 5.9 million pilgrims who visited in 2014.

Terrorists attacks in Europe throughout the year are also thought to have discouraged visitors from traveling during what are typically busy tourist seasons in Italy.

The statistics released by the Vatican stand in contrast to the numbers published on the Jubilee of Mercy website, which states that over 21 million participated in the Holy Year of Mercy. The number includes pilgrim groups and individuals who crossed through the Holy Door that are not included in the Vatican’s statistics.

The papal event statistics do not include papal events in the city of Rome or international visits made by Pope Francis. They also are based on the number of ticket requests and estimates of crowd size.