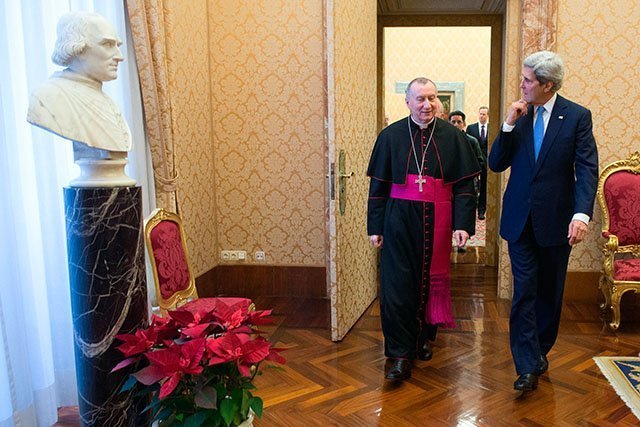 Then Cardinal-designate Pietro Parolin, Vatican secretary of state, meets with his U.S. counterpart, John Kerry, at the Vatican in this Jan. 14, 2014, file photo. Cardinal Parolin said Jan. 6 that he expects Pope Francis to visit New York City and Washington, D.C., during his September trip to the United States.

VATICAN CITY (CNS) — The Vatican secretary of state said he expects Pope Francis to visit New York City and Washington, D.C., during his September trip to the United States.

Cardinal Pietro Parolin, who as secretary of state is considered the highest Vatican official under the pope, spoke to reporters Jan. 6, following a ceremony to dedicate a new building at the Pontifical North American College, the U.S. seminary in Rome.

Asked if Pope Francis would visit the United Nations in New York in September, Cardinal Parolin replied: "I think so, I think so, but no official announcement has been done. But everybody is speaking of that."

Asked if the same trip would include a visit to Washington, the cardinal replied: "Of course," then added with a laugh, "but no official confirmation has been given."

In November, Pope Francis confirmed reports that he would attend the World Meeting of Families in Philadelphia in September. So far, that is the only confirmed stop on what is expected to be a more extensive papal visit to North America.

The pope had already acknowledged receiving invitations to Washington from President Barack Obama and the U.S. Congress, and to New York from the secretary-general of the U.N.

"Maybe the three cities together, no?" Pope Francis told reporters in August, adding that he could visit the shrine of Our Lady of Guadalupe in Mexico on the same trip — "but it is not certain."

Cardinal Parolin was also asked about the pope’s decision not to create any U.S. cardinals at a consistory Feb. 14, where most of the 15 new cardinal electors will hail from developing countries in the global South, including several that have never been represented in the College of Cardinals.

"The Holy Father wanted to give this broader sense of the universality of the church," and so looked to dioceses that normally do not have a cardinal, he said. "It’s nothing against anybody, that is for sure."